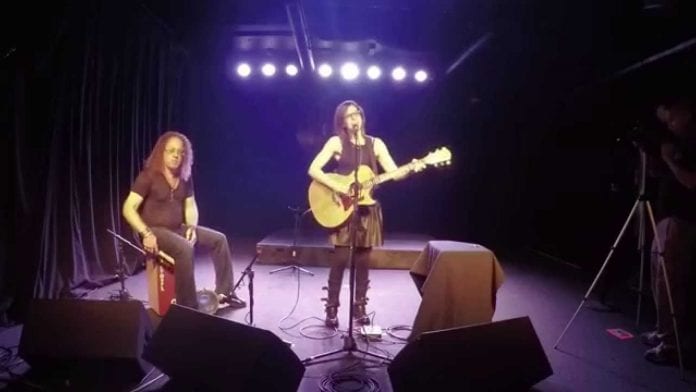 Last night in Atlanta, Georgia at one of Center Stage’s three venues, The Vinyl, Lisa Loeb performed an acoustic set in a very intimate setting. Accomplished songwriter and musician, Loeb shared her wonderful songs along with her acoustic guitar playing to a very attentive crowd of listeners. The energy level of the audience was calm, yet with an excited energy that filled the room throughout the performance.

The Vinyl at Center Stage is a cozy venue. The darkened room creates an ambience in which the audience can really listen to the music and enjoy the performance of the artist on a higher level. The intimacy that is conveyed within this style of performance shows the true talent of an artist. This style of show is, as a listener and fan, where one really gets to know an artist.

The opening act, Sara Rachele, performed an acoustic set and was a pleasant surprise. Rachele, who is originally from Decatur, Georgia, but also spends time in NYC, has vocals that can be described as a soulful folk coffeehouse sound. Her performance of “Love of Three” was kindly melodic with a nice beat. All of her songs were performed on her “Georgia” acoustic guitar (as she also has one in her second home in “NYC”), and this made the evening even more special to see.

Rachele’s laid back style of a simple t-shirt and black pants was appropriate for the performance. Sitting or standing in the audience one could meditate on her melodic music. Rachele’s vocals were strong and she adeptly blended the tempos of soft music and thoughtful lyrics with songs that had a more upbeat tempo.

Rachele had a conversational approach with the audience when she was not singing and the crowd responded well to this. For her last song of the evening she performed a remake of a Dolly Parton song “I Will Always Love You.” She connected well with the audience and was well received.

The main attraction for the evening, Lisa Loeb, took the stage in fashionable style wearing a black leather mini skirt, black sleeveless top embellished with glistening rhinestones around the sleeves, and black tights, contrasted with motorcycle boots with three buckles along the side. And, of course, her signature cat-eye framed glasses.

Once taking the stage, she set out playing her acoustic guitar and went right into the first song of her set. From then on, there was an air of delightful tunes that filled the atmosphere of The Vinyl. She played songs from her most recent album, No Fairy Tale, as well as some of her original songs from the ‘90s, including “This” and, of course, the song that put her on the map – “Stay (I Missed You.)”  Of special note, this year marks the 20-year anniversary of her #1 hit song “Stay (I Missed You)” from the movie soundtrack for Reality Bites. She even mentioned that she this was special because she was wearing the same style of eyeglasses that she wore for the making of the video for that song …even showing the new cleansing cloth that comes with every set of glasses from her Lisa Loeb Eyewear Collection!

And what would an evening be without a cute song from her Lisa Loeb Silly Sing-Along book – “The Disappointing Pancake.”

The audience responded well throughout the evening as Loeb was very charismatic and witty. She also took a chance with a new song that she has been writing and working on, but could only remember the chorus. In typical Lisa Loeb style, she laughed it off and continued right on playing. She even took a few requests from the crowd.

A special highlight from the show was when Loeb invited local artist and friend Bram Bessoff to join her on stage playing the cajon drum box for several songs. They had the crowd cheering during their performance of “Truthfully.”

Lisa Loeb has the uncanny ability to not only connect musically with the audience, but also to connect with them on a personal level. When speaking to the crowd between songs, it was as if she was speaking to her best friend. Of particular interest are the stories that go along with her songwriting process. She also spoke of how she likes to connect with her fans and will even respond to them personally on twitter late at night. This connection that Loeb has with her fans is why people love her.

Watching Lisa Loeb do her acoustic show is a remarkable experience – not only does one get to hear great music, but they get to learn more about her and her charitable organizations like Camp Lisa, the many organizations she supports, and cute stories on being a Mom! She even took time after her performance to meet with the audience.

If you want to attend a performance with great atmosphere and great talent, then attend a Lisa Loeb performance, especially if you are lucky enough to see her acoustic show. Loeb is a successful songwriter, guitarist, vocalist, eyewear designer, voice-over artist, actress, children’s book author, and speaker (and the list goes on…) who still has time for her fans and family.

The performance at The Vinyl here in Atlanta, GA last night was another great success for Lisa Loeb.