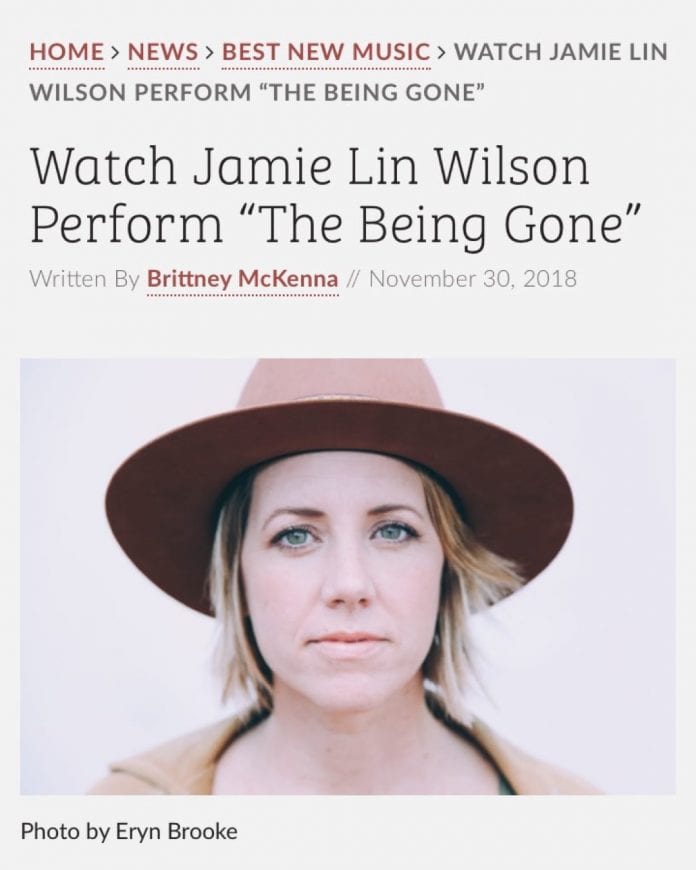 NEW YORK — November 30, 2018 — Jamie Lin Wilson is known for her ability to tell a good story, often honing in on the details of everyday life that most people miss. The Texas-based singer-songwriter just released her new album, Jumping Over Rocks, on October 26; its 10 tracks revealing Wilson’s observations through tales of men, women and children coping, striving, celebrating and learning. Since its release, the album has climbed to #17 on the Americana Albums Chart, while current single, “The Being Gone,” reached #26 on the Americana Singles Chart. The video for the song premiered with American Songwriter today.

Jumping Over Rocks finds Wilson narrating a rich collection of story songs that encompass universal themes but remain specific and personal, too. Wilson wrote from the outside looking in, studying characters around her more than she had before. It was recorded live over four days at Arlyn Studios in Austin; a fierce cast of musicians joined her, including Charlie Sexton on guitar, and together, Wilson and the players cut every track live.

The album gets its title from standout track “Death and Life,” an epic that took Jamie four years to write. The song follows a widow mourning her husband and not quite ready to let go; a son who copes with his father’s death by getting to work with his hands, hammers, nails, and 2x4s; children jumping over rocks in a graveyard, inadvertently learning about the circle of things. WhenBillboard talked to her about the song, she said, “…it’s not sad. It’s saying, ‘Aren’t we lucky to be able to see that, to know that everything comes back around and keeps going — life after death in the real world.'”

Other standouts include “Faithful and True,” co-written with Jack Ingram, and “The Being Gone,” which Rolling Stone Country called a lush travelogue. “Oklahoma Stars,” co-written withTurnpike Troubadours’ Evan Felker, pays tribute to those long nights that run together, but in hindsight come together to build a relationship, land, or life. Wide Open Country said the song’s lyrics “may as well be Polaroid shots.”

“Instant Coffee Blues,” originally written by Guy Clark and featuring Ingram as a duet partner, is the sole cover on the record. It’s followed by Wilson’s own song, “Run,” which compelled PopMatters to remark that “Wilson inhabits a particular cross-section of Americana that blends honest-to-goodness country with storyteller’s folk. It’s a line that few artists have been able to ride for as long and as balanced as Wilson has, but those that have are icons—John Prine, Guy Clark, Emmylou Harris.”

After receiving an acoustic guitar for Christmas when she was 19, Wilson began attending open mics in College Station, Texas, and was immediately welcomed into what was primarily a boys’ club of aspiring pickers. There, she met fellow bandmate Shane Walker — a precursor to her time with The Gougers. She would eventually also co-front The Trishas, as well — the opposite of a boys’ club, noted for their impeccable harmonies.

Wilson is currently on the road, with dates including shows supporting Turnpike Troubadours, American Aquarium, Wade Bowen and Mike and the Moonpies.