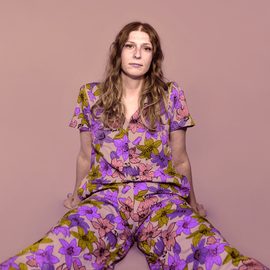 Liz Cooper & The Stampede’s music video for their new song, “Fondly & Forever,” premieres at Billboard, who proclaim, “the track has that rare quality that allows it to appropriately soundtrack both a packed theater and an empty dive bar.” Watch/share here.

“Fondly & Forever,” which debuted at PopMatters, is the third track unveiled from Liz Cooper & The Stampede’s anticipated debut full-length album, Window Flowers, dueAugust 10 on the band’s own label, Sleepyhead Records, via Thirty Tigers (pre-order). Each digital pre-order includes an immediate download of  “Fondly & Forever” as well as “Hey Man” and “Mountain Man.”

Already receiving widespread acclaim, The New York Times recently featured the band and their video/single “Hey Man” calling it, “A nugget of 50-years-late-breaking psychedelia out of Nashville, ‘Hey Man’ circles through four chords and flaunts a distorted guitar hook, jazzy drumming and an elaborate but transparent throng of voices and guitars behind Liz Cooper’s straightforward come-on.” The official music video debuted at NPR Music/WXPN World Café, who hails it as, “the ultimate twist to a rock and roll tale.” Rolling Stone recently described them as, “Atmospheric folk-rock with psychedelic flourishes,” and of their lead single asserted, “‘Mountain Man’, with its Fleet Foxes-esque vocal harmonies and delicate acoustic guitar, is captivating enough on its own, but its VR-themed music video is not to be missed.” Watch/share the official music video HERE.

In celebration of the release, the band is currently on tour with select headline performances and summer festival sets at Wild West and LouFest plus additional dates with Houndmouth, Mt. Joy, and Oneida. These shows follow the band’s busiest touring year-to-date, including a debut performance at Austin City Limits Music Festival in 2017 and tours with Lord Huron, Deer Tick, Rayland Baxter, Ron Gallo and Blitzen Trapper. See below for full tour details.

Recorded at Welcome to 1979 in Nashville with co-production from TJ Elias, Window Flowers is the culmination of a yearlong dedication in which Cooper pushed herself to spend every single day creating in at least one medium and saying “yes” to everything she was asked to do. Of the recording, Cooper reflects, “Our first time working with an outside producer and our first time in a proper recording studio was when we recorded Window Flowers. TJ Elias’ mad scientist ideas, an abundance of hot dogs, and lack of sunlight pushed us outside of our comfort zones to work more cohesively as a unit than we ever had before.” Joined in the studio by bassist Grant Prettyman and special guests Leah Blevins, Will Brown, Steve Dawson, Emily Kohavi, Michael and Ben Ford and Gianni Gibso, the new album follows Cooper’s earlier self-released EPs—Monsters (2014) and Live at the Silent Planet (2016). Alongside Cooper, “The Stampede” consists of Prettyman and drummer Ryan Usher.

Already known in Nashville for their electric live shows, Liz Cooper & The Stampede experienced their first breakthrough in 2016 with the release of their Audiotree Live session, which has attracted over 220,000 views on YouTube, and over 1,000,000 streams on Spotify.

Additionally, the band placed as one of NPR Music’s runners-up during their 2016 Tiny Desk Contest. Of the submission, NPR Music’s Benjamin Naddaff-Hafrey hailed, “‘Mountain Man’ is a catchy, simple love song written with the clarity of a good cut of Nashville country. Liz Cooper guides the song with her percussive, fingerpicked guitar and her crackling voice…a seamless balance of muted rhythmic sounds and propulsive drive that feels so good…It sounds like a car whirring past a field of trees, the light shining through.”

Cooper grew up in Baltimore, MD later attending Towson University on a full athletic scholarship for golf, but after her freshmen year left to pursue a musician’s path in Nashville. It was there that she discovered her sound and singular voice through a new creative community, which includes the likes of Ron Gallo, Rayland Baxter, Okey Dokey, Erin Rae, Cage the Elephant, The Weeks, The Wild Feathers, Jamestown Revival, Desert Noises, Future Thieves and Caroline Rose.