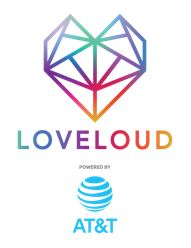 Salt Lake City, UT – July 29th, 2018 – LOVELOUD Festival Powered By AT&T reached its goal of raising $1,000,000 Saturday night at Rice-Eccles Stadium in Salt Lake City, UT.  This year the LOVELOUD Foundation is donating its proceeds from the festival to LGBTQ+ organizations including Encircle, the Tegan and Sara Foundation and the Trevor Project.  The SOLD-OUT festival saw people coming from all corners of country, and Lt. Governor Spencer Cox read an official proclamation from Governor Gary Herbert that declared July 28, 2018 “LOVELOUD Day” in Utah.

Dan Reynolds founded the LOVELOUD Foundation in 2017 as a catalyst to bring communities and families together to help ignite the vital conversation about what it means to unconditionally love our LGBTQ+ youth.  The LOVELOUD Foundation is a 501(c)(3) and offers hope to young people, letting them know they’re not alone and encouraging acceptance in the home and community. It all begins with talking about, sharing and showing the realities of what LGBTQ+ teens face daily.  Additionally, as part of this quest, Dan Reynolds created a documentary centered around LOVELOUD, called Believer. The film received runner-up for the “Festival Favorite Award” at Sundance Film Festival 2018 and premiered on HBO in June.

LOVELOUD Festival Powered By AT&T was live streamed in its entirety on AT&T’s social media handles, and in addition, AT&T donated $1 for every use of the hashtag #LOVELOUD on Twitter, up to $50,000. AT&T, a longtime supporter of the LGBTQ community, recently announced a $1 million sponsorship and multi-year initiative with The Trevor Project. Together, through music and an inspiring message, LOVELOUD and AT&T share a vision of the future where LGBTQ youth are loved and accepted.

AT&T’s commitment to equality and inclusion for the LGBTQ community began in 1975 when the company became one of the first American corporations to adopt a policy prohibiting discrimination against employees based on sexual orientation. AT&T also has a long-standing commitment to fostering an inclusive workplace. LEAGUE at AT&T (Lesbian, Gay, Bisexual, Transgender and Allies Employee Organizations of AT&T) is one of the oldest LGBTQ Employee Resource Groups (ERG) in the nation. In 1998, AT&T adopted one of the first domestic partner benefits programs for LGBTQ employees. In 2006, AT&T was one of the first U.S. corporations to offer transgender-inclusive health care benefits. At AT&T, diversity and inclusion will always be top priorities.

Lyft was the official rideshare partner for this year’s festival supporting the goal of raising $1 Million.  Lyft donated $5 to the LOVELOUD Foundation for every ride taken to the festival, and ensured concertgoers a safe and swift pick up and drop off experience on the grounds.

The LOVELOUD 2018 Festival is grateful for all sponsorships and the overwhelming support from AT&T, Lyft, official hotel partner Hilton, MGM Resorts, Lululemon, Pluralsight, Vivint Smart Home, Qualtrics Experience Management, DOMO. Lyft is also the official rideshare partner for this year’s festival and Hilton is the official hotel partner. The generous commitment of these sponsors can help knock down the negative and offer hope to young LGBTQ+ people, letting them know they’re not alone.