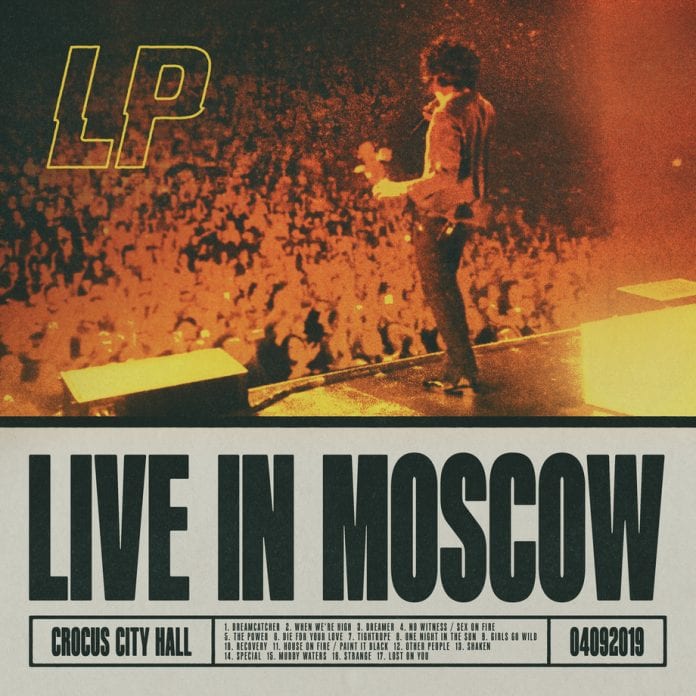 “The singer/songwriter with mega pipes you need to know.” – InStyle

“Her music has a depth of feeling that is rare.” – MTV

New York, NY (May 29, 2020) – Singer-songwriter LP had planned a massive international headline tour throughout 2020 that was unfortunately postponed due to COVID-19. To make it up to fans, she has released Live In Moscow today via Vagrant/BMG – Enjoy via your favorite DSP. This is LP’s first-ever live album, recorded at Crocus City Hall in Moscow in 2019 in front of a colossal sold-out crowd of over 6000 fans. The 17-track performance spans multiple albums, including the mega-hits “Lost On You” and “Girls Go Wild,” along with two collaborative medleys that include covers from Kings of Leon & The Rolling Stones. “This show is such a beautiful example of the passion, love, and affection I share with my Russian audience,” said LP. “I’m so happy everyone can now hear this special night!! Spasibo!” LP is a global phenomenon, selling from 2,500 to 10,000 tickets in over 100 cities from Minneapolis to Milan to Mexico City to Moscow. Her global career has established LP as a unifier of diversity, an artist that brings people together instead of dividing them apart. Her cultural relevance is peaking now more than ever before as her social following continues to grow by over 100,000 fans a month, her catalog is experiencing over 4,000,000 streams a day, and this live album is her first full-length release in almost 18 months. LP’s latest full-length Heart To Mouth was released in late 2018 and stands out as her most direct statement yet. She continues to break in new markets, Latin America being the region to most embrace her song, “Girls Go Wild,” which was crowned the most played song at radio in Italy in 2019. She started to pave the way for that highway on 2017’s Lost On You. The title track has now been #1 in 18 countries, Diamond in Mexico and France, 4x Platinum in Italy, Platinum in Greece and Poland, Gold in Belgium and Switzerland, and has recently surpassed two billion streams. LP has been hailed by Billboard, Interview, Paper, Out Magazine, V Magazine, and British Vogue, recently claiming the cover of Elle Mag Mexico. Show-stopping performances have graced the stages of The Tonight Show with Jimmy Fallon and The Late Late Show with James Corden to Conan and Jools Holland as well as Coachella, Osheaga, Outside Lands, and many others.