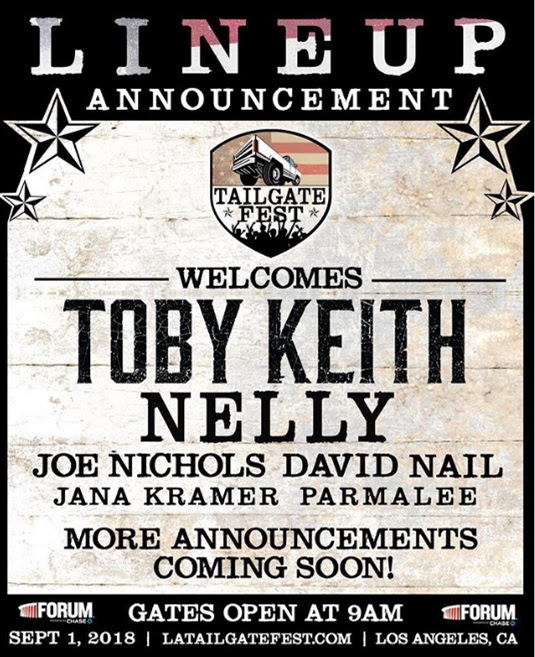 Los Angeles, CA (May 24th, 2018) – Nelly, Joe Nichols, David Nail, Jana Kramer and Parmalee have all been added to the lineup of the First Annual TAILGATE FEST (LATailgateFest.com) headlined by country music superstar Toby Keith, taking place Saturday, September 1, 2018 (Labor Day Weekend) on the outdoor grounds of the Forum in Los Angeles (Inglewood). As a one-day country music and tailgating extravaganza, TAILGATE FEST caters to the fans who show up hours before to turn the pre-show into the party. It brings the stage outside to the tailgate. No packing up the party to head inside, no need to stop that game of cornhole, no need to stuff all your belongings in your pockets to last you the evening. Fans will fire up those barbeques, crack open those coolers, play games and tailgate in the hot California sun while they listen to their favorite country stars from their own tailgate as TAILGATE FEST brings the stage to the tailgaters!

“That’s a Labor Day Weekend done right! This line up is going to be so much fun. All of these artists have tons of hits that will make Tailgate Fest feel like the soundtrack to our country loving lives. When you tailgate you want to know every word so you can jam out and that’s what this line up accomplishes. Oh yeah, and we’re not even close to finished yet. Lot’s more on the way!” said Tailgate Fest creator, Melissa Carbone

Tailgate Fest will super-serve the fan experience by offering the unique concept of experiencing the show truck-side, car-side, the more traditional style of stageside or even poolside. The choice belongs to the fan.

Headlined by superstar Toby Keith on his Should’ve Been A Cowboy Tour XXV presented by Ford F Series, the additions to the festival lineup feature some of the best musicians in country music. Academy of Country Music (ACM) Award-winning and Grammy Award-nominated Joe Nichols, on tour promoting his eighth studio album Never Gets Old released in 2017, joins the line-up along with ACM and Grammy Award-nominated country star David Nail. Composed of brothers Matt and Scott Thomas (lead vocals and drums), cousin Barry Knox (bass), and their best friend Josh McSwain (lead guitar), Parmalee are the quintessential American Country Band and they also join the lineup alongside one of country music’s brightest new stars, Jana Kramer, whose platinum debut single “Why Ya Wanna” rocketed to No. 3 on the Billboard Hot Country Songs chart in 2012 made her the most played new artist that year. Also added to the lineup is St. Louis, Missouri-born rapper, singer, songwriter Nelly who has been ranked by the Recording Industry of America as the fourth best-selling rap artist in American music history, with 21 million albums sold in the USA.

In addition to the music performances, TAILGATE FEST will also feature several genre-curated activities including The Tailgate Cornhole World Championships which will kick off early in the day at the “Extreme Cornhole Court” where tailgate groups can compete against each other for prizes. Those who want to flex their truck muscles can enter their spruced-up truck in theJacked Up Truck Competition where a panel of judges will select the “Best in Show” truck of the day, with the winner taking home a brand new tailgating dream machine. TAILGATE FEST will also feature the Two Step Honky Tonk for those wanting to show off their dancing skills and aDunk Tank for those wanting to stretch out their pitching arms. Food and beverages will also be available for purchase on site.

Tickets start at $109 for General Admission all the way up to a Super VIP with reserved Lawn Chair Viewing, access to a stageside pool (Yes, we said pool) and access to the VIP Forum Club (plus any applicable fees). For some fans who are “Country AF” but don’t want to tailgate, General Admission stage-side and pit passes offer the more traditional experience to get up close to the stage. A Lawn Chair viewing platform, Terrace viewing, and even a pool stage-side make Tailgate Fest perfect for every taste. A limited number of people can secure a pit and pool pass to kick back and keep cool while watching the best Country music has to offer. 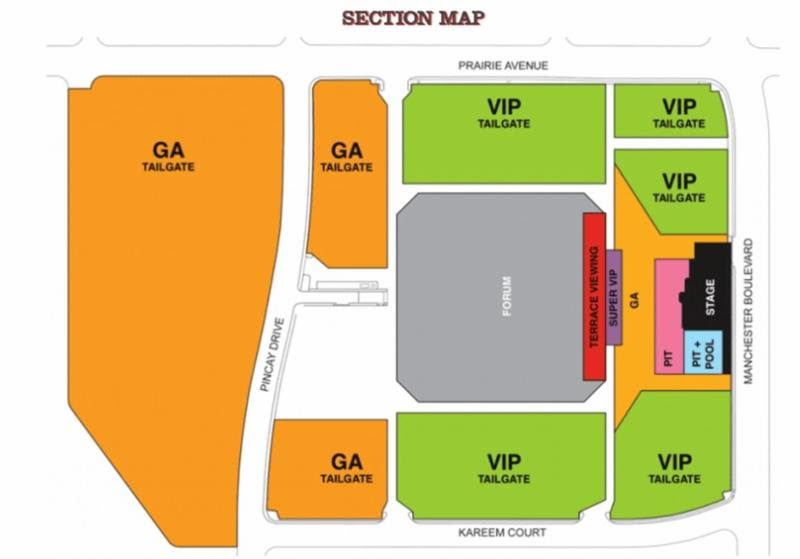 Pop a top and drop a tailgate as Tailgate Fest comes to Los Angeles to bring a little sweet home Americana to town!