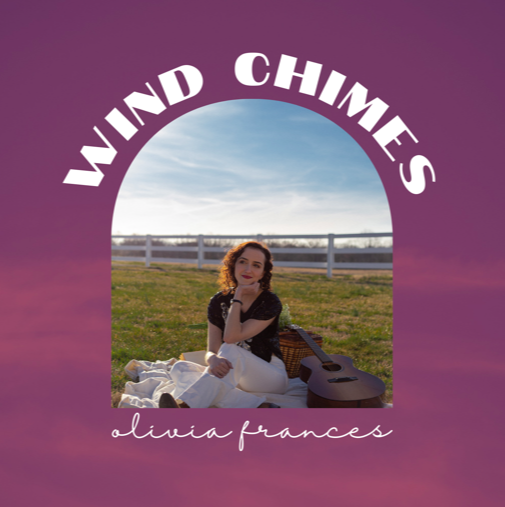 NASHVILLE, TN – October 13, 2021 – Nashville-based, folk/pop Indie artist Olivia Frances’ new single, “Wind Chimes” is a 70’s inspired, reflective rumination of life, death, and the space in-between. Written after the recent loss of her grandfather, the multi-award-winning artist felt the time was right to share her song of loss with so many affected by the global pandemic. Whimsical and grounding, yet captivatingly mysterious all at once, Olivia combines the influences of Kacey Musgraves, Hailey Whitters, and Stevie Nicks into her unmistakable sound.
“Wind Chimes” was written with her friend and writing partner Michael Astrachan in April 2018 over Skype. The songwriting pair met in July of 2014 at the Nashville Songwriters Association International (NSAI) Song Camp. Astrachan, who resides in Nashville, was based in Kansas City, MO at the time and the two had weekly Skype writes during Frances’ 4-years at Clark University in Worcester, MA. Astrachan has been a major part of Frances’ musical journey, co-writing 9 out of the 11 songs on her latest full-length album Orchid released in 2019.
“I remember Mike throwing out the title idea, ‘Wind Chimes’ and us writing the first verse within three minutes. The song kinda fell out in a way that reminds me there’s something greater than us that as songwriters we tap into.”

Catchy with driving acoustic guitar and an unexpected sonic ending, “Wind Chimes” is pleasantly distant topically yet similar musically to her latest love song release, “Daffodil Dreams.” The two releases tap into Frances’ unique talent as a writer to hone in on specific, unique images and subject matter while still capturing emotions on a deeper level.

Although Frances is an up-and-coming artist, she’s not quite new to the scene. Frances continues to navigate her successful musical journey, as “Moon to My Sun” was the VOX Pop Winner in the Love Song Category at the 16th Annual Independent Music Awards. Orchid was nominated for Album of the Year (Multi-Genre) and she was nominated as Artist of the Year (Multi-Genre) in the 2020 Josie Music Awards. “Wind Chimes,” produced by the distinguished Pat Lassiter at Riverfront Recording Studios in Nashville, TN, continues a new musical chapter for Frances. She can’t wait for her fans to hear what’s to come, and it’s right on the horizon.

After a momentous 2021 performing at various venues across the country including Cheyenne Frontier Days (The World’s Largest Rodeo), Frances will end the year with a bang with a tour from Tennessee to Florida. Follow her on BandsinTown and catch her in a city near you.