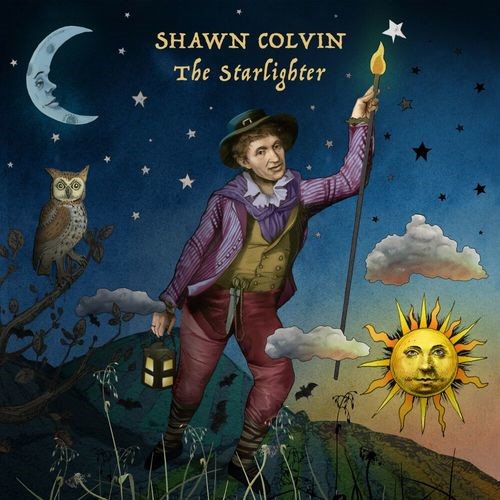 On Tour with Lyle Lovett This March

GRAMMY-winning singer-songwriter Shawn Colvin has released a new video for the song “Hush Little Baby” from her forthcoming Amazon Original album The Starlighter. The Starlighter is a collection of songs adapted from the children’s music book “Lullabies and Night Songs,” and will be released on February 23rd via Amazon Music.

The Starlighter will be released exclusively for purchase on Amazon Music and streaming through Amazon Music Unlimited and Prime Music. Pre-order for the album is now available at www.amazon.com/thestarlighter, and fans will immediately be able to stream and download the title track from the album, “The Starlighter.”

Colvin previously released a video for the album’s title track via Rolling Stone, as well as a video for “Minnie And Winnie” with Billboard.

“Hush Little Baby” is the third installment in a series of videos based on Victorian paper theatres and the illustration style of children’s books from the same era, and were created by the Manchester, UK/Los Angeles-based motion design studio WeFail. Each scene contains over one hundred layered illustrations, and every element in the video was drawn using a digital tablet before being animated by hand. Shawn Colvin’s character in the video consists of 30 individual hand-drawn pieces, each digitally painted before motion design was applied to create the complete figure.

As an eight-year-old girl growing up in Vermillion, South Dakota, Colvin’s mother and father presented her with “Lullabies and Night Songs,” a children’s music book that joined famed 20th century American composer Alec Wilder’s arrangements with the fantastical artwork of “Where the Wild Things Are” author and illustrator Maurice Sendak. In 1998, on the cusp of becoming a parent herself, she returned to its pages for her album, Holiday Songs and Lullabies, which featured updated takes on several selections from Wilder and Sendak’s book.

Now, another 19 years later, she has revisited the book once again for her newest release, The Starlighter, Colvin’s tenth solo effort overall. The album finds the GRAMMY-winning singer, songwriter and guitarist reaching into her past in the service of crafting a fresh and thoroughly unique offering—one that resonates with the warmth and tenderness of poignant familial experience and remembrance. The Starlighter’s 14 tracks are a mix of traditional numbers and children’s standards, all of them culled from the pages of Wilder and Sendak’s transformative book.

The selections from “Lullabies and Night Songs” that Colvin chose for The Starlighter run the gamut from traditional fare like “Hush Little Baby” and “Raisins and Almonds,” to “Minnie and Winnie,” with prose by 19th century Poet Laureate of Great Britain Alfred, Lord Tennyson, and “Cradle Song,” including lyrics by celebrated English poet William Blake. As for how she went about choosing which pieces to adapt, Colvin admits it wasn’t easy. “There wasn’t a dud among them,” she says. “But we wanted to give the record some dynamics in terms of the feel, so we made sure to choose some upbeat songs, because I sort of tend toward the melancholy, slower, more hypnotic tunes.”

The Starlighter arrives on the heels of two recent, acclaimed releases from Shawn Colvin. In June 2016, Colvin and longtime friend Steve Earle united on the duo album, Colvin & Earle. An expanded 20th anniversary release of A Few Small Repairs, Colvin’s seminal breakthrough album, was also released in September 2017. Colvin marked the occasion by undertaking a seven-week U.S. tour in which she and her band performed the album in its entirety.

For the first time ever and for a limited time only, Prime and non-Prime members who haven’t yet tried Amazon Music Unlimited, can get three months just $0.99. Learn more:  www.amazon.com/unlimited.