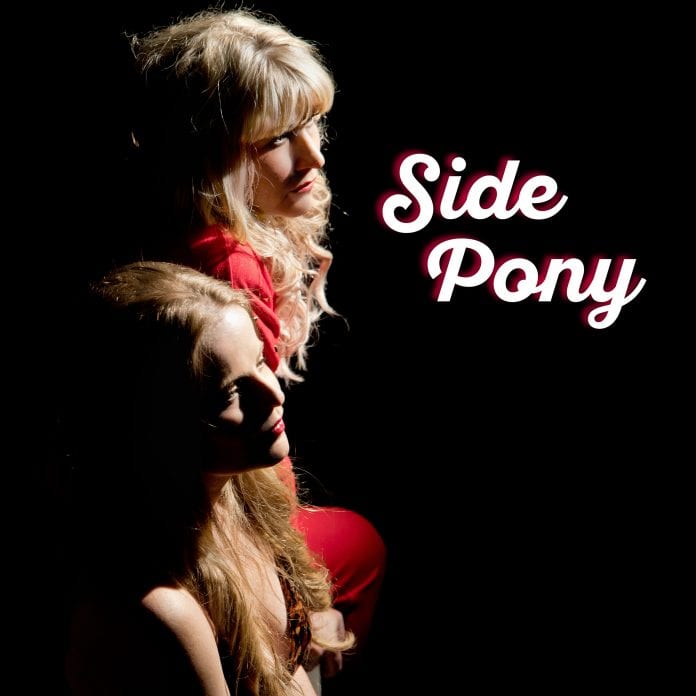 Side Pony, featuring singer/songwriters Alice Wallace and Caitlin Cannon, are pleased to announce the release of “Lucky Break,” the first single off of their hotly anticipated Fall 2021 release for Mule Kick Records. The video for “Lucky Break” saw the light of day when it premiered at The Boot on April 13th.
In a town bursting at the seams with songwriters, it was a stroke of Nashville serendipity that found Americana artists Alice Wallace and Caitlin Cannon seated next to each other at a songwriter’s round back in 2018. Now, two and a half years later, with an armful of co-written songs that deftly straddle the line between class and crass, Wallace and Cannon have decided to take their shared love for a heartbreaking hook and punchy turn of phrase and form their own band, Side Pony.

“Lucky Break” provided Cannon and Wallace the chance to record with some of the best Nashville has to offer. It was recorded at the East Nashville studio of producer/guitarist Doug Lancio (Patty Griffin/John Hiatt/Todd Snider), with accompaniment from Chris Autry (Josh Turner) on bass, Bryan Owings (Emmylou Harris) on drums and Dan Mitchell on keys. Combine that with the sound that neo-meets-timeless producer Lancio was able to capture, and the entire experience was very lucky, indeed.

“Alice Wallace is a powerhouse of a singer, in the classic definition,” says Lancio, who spent 14 years touring with Patty Griffin, and produced her 2002 album 1000 Kisses. “I’ve wanted to work on a record with her since I first heard her voice. Alice introduced me to her collaborator/ co-writer Caitlin, and turns out, Caitlin has an equally compelling voice with a distinct personality. It’s rare enough to work with singers of this caliber on their own, let alone have both of them singing material they’ve discovered together.”

When the two songwriters first met, Cannon was spending half of her time in Nashville, writing sometimes 3 songs a day in a mad frenzy of creativity before packing it up and heading back home to Colorado to tend to the hair salon she owned. And Wallace, then based in California, was in Nashville for only two weeks that September to perform at the Americana Music Festival when she found her way into a songwriter night on the west side of town. So it really was a touch of that sometimes elusive luck that found the two writers in the same place at the same time on that night back in 2018. The chemistry between the two was immediate, and they wrote their first song the very next morning sitting on the teal songwriting couch at Cannon’s Hermitage home. “Lucky Break” is the icebreaker in a collection that will soon become their October 2021 debut.

Since then, the two artists have garnered plenty of accolades on their own: Wallace’s 2019 release Into the Blue led to her touring festivals and venues across the U.S. and Europe, and receiving praise in publications like Rolling Stone Country and American Songwriter. And even though Cannon released her solo debut The TrashCannon Album in the midst of a global pandemic in May 2020 and could not tour, the reception was stellar – earning her a 9.5 rating and a spot on the list of Essential Albums of 2020 by Saving Country Music, as well as features in Billboard, Glide Magazine and more.

Though Wallace and Cannon are each well-established songwriters and performers individually, the strength in the pairing of these artists is in the depth of their differences – which is as great as the space between the East and West coasts. Wallace’s voice rings with echoes of the 70’s country and the rock of her California roots, with influence from artists like Linda Ronstadt, Emmylou Harris and Joni Mitchell. Cannon, on the other hand, spent the entirety of her twenties in New York City and developed a grungier songwriting style that brings to mind Nanci Griffith or Kelly Willis, and derives influence from Alt-country artists like Shovels and Rope and Elizabeth Cook. On stage as Side Pony, Wallace’s mesmerizing, powerhouse performance skills are expanded by Cannon’s plaintive and earnest harmonies, and their combined affinity for sucker-punch lyrics and truth-telling leaves no empty spaces.

As women in the music industry celebrate each other more in recent years, spurred by changes in the culture, the noticeable gender inequality in the music business and the rallying cry of the #MeToo movement, Cannon and Wallace are embracing the power of their collaboration. They’ve also joined forces with female-led record label Mule Kick Records to release their debut single, with plans for a full album later in 2021. Co-founded by artists KP Hawthorn and Adrienne Cohen-Isom (whom Alice worked with on her Into the Blue album), Mule Kick was started last year to release LA-based band NOCONA’s new record Los Dos, and will soon be releasing a single from the Rockabilly Filly herself, Rosie Flores, a new album from The HawtThorns, and the debut EP of new Los Angeles duo Desert Hollow.