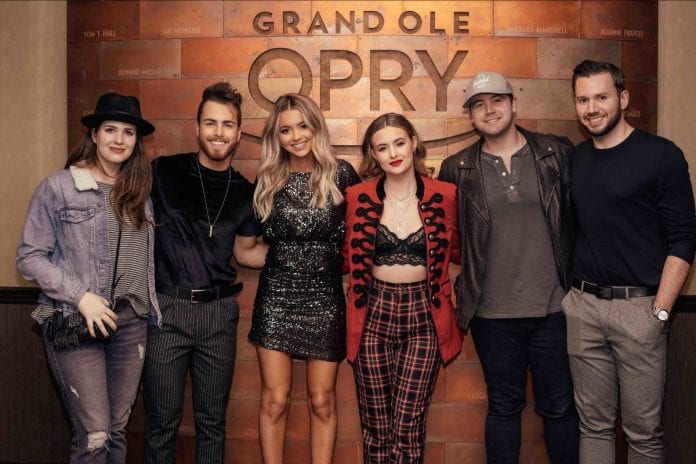 May 21, 2020  — Nashville, TN — Rising country trio TEMECULA ROAD has signed a co-publishing deal with JRM Publishing and Disney Music Publishing.  Signed to Buena Vista Records, the newly-minted Nashville residents have been named a CMT Discovery Artist and have been called out by Huffington Post, CMT, Sounds Like Nashville, and Taste of Country as one of the top new country artists to watch.

“The talent and work ethic of Temecula Road is undeniable. We are so excited to get to work with Temecula Road and Disney Music Publishing,” says JRM Publishing’s Jimmy and Sarah Robbins.

“We met Jimmy and Sarah on our first trip to Nashville five years ago and have since then become good friends,” says Dawson. “Now that we’ve made the move here full-time, it felt natural to continue our relationship with them as they’ve watched us grow from the very beginning,” says Emma. “We’re so excited to be working and writing with the team at JRM,” adds Maddie.

Named after the town they grew up in, Temecula Road (Sisters Emma and Maddie Salute and friend Dawson Anderson) is known for their trademark harmonies. With over 13 million streams and counting, the trio is releasing three new acoustic tracks in the coming months, starting with just released “Fades,” which hit Top 5 on the Radio Disney Country Chart, followed by Rolling Stone Country Song You Need To Hear “Never Knew I Needed You” on May 29 and the soulful track, “Maybe Not,” on June 19.

Over the past two years, Temecula Road made debut performances at C2C’s Country Music Festival in London, Stagecoach Music Festival and the CMA Music Festival. They made their Grand Ole Opry debut on November 1 at the first weekend of the show’s annual winter run of Opry At The Ryman in downtown Nashville— receiving a standing ovation—and returned to the Opry stage in February. The band was named one of Radio Disney’s NEXT BIG THING artists and were nominated in the “The Freshest! – Radio Disney Country Best New Artist” category at the Radio Disney Music Awards, putting them in great company alongside Maren Morris, Lauren Alaina and Old Dominion.

JRM Publishing is a boutique publishing company based out of Nashville, TN with a diverse roster of talented writers finding success in multiple genres. It is owned and run by Jimmy and Sarah Robbins.  Jimmy Robbins is a Grammy + CMA nominated Nashville-based songwriter, producer, and publisher who has penned over 200 cuts in multiple genres. He has earned 12 Top 10 hits including 9 #1 songs as a writer. Temecula Road joins current roster including Jimmy Robbins, Eric Arjes, Derek Austin, Kyd the Band, and Lindsey Lee Taylor.

For more information and the latest news, be sure to visit http://www.temecularoad.com.