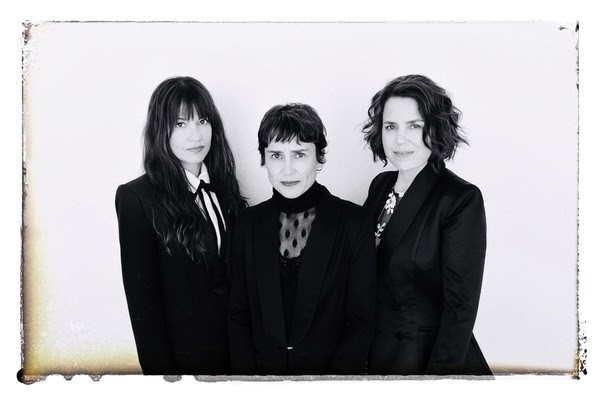 The Haden Triplets—Petra, Rachel, and Tanya—are sharing “Memories of Will Rogers” from their upcoming album, The Family Songbook, out January 24.   The song was written by their grandfather (and legendary bassist Charlie Haden’s father), Carl E. Haden, friend to the Carter Family and Porter Wagoner, and patriarch of the singing Haden Family, a fascinating footnote in country-music history.

Hear “Memories of Will Rogers” on all streaming services, and watch the video for “Every Time I Try,” in the spirit of the 1950s Ozark Jubilee national television show from Springfield, Missouri, where the Haden Family regularly performed.   The video was directed by Rachel Lichtman with a cameo by Nick Offerman.

Arranged by the Triplets, their grandfather’s songs made their way to the sisters via uncle Carl Haden Jr., who had recovered his father’s sheet music and relics like the songbook Favorites of the Haden Family, a ‘zine-like’ collections of family photos and anecdotes.

Charlie Haden joined the family band as a tot in the late ’30s, and became a featured singer—yodelin’ “Cowboy” Charlie—when he was so young his mother had to hold him up to reach the mic. He sang with the family on the radio well into his teens, including broadcasts from the Hadens’ home on their dairy farm and as part of a hit variety show.

The Haden Triplets carry between them a list of credits that includes some of the most interesting rock, jazz and experimental music to come along in the past 30 years: that dog., Weezer, Beck, Foo Fighters, Green Day, Jimmy Eat World, Bill Frisell, Sunn O))), Mike Watt, The Fates from Anaïs Mitchell’s Hadestown, Paul Motian and the Decemberists, to name just a handful. The Triplets’ sound is as otherworldly as ever—evocative of both the old, weird America and a specific brand of vocal charm.

What Would You Give

Memories of Will Rogers

Free As a Bird

Every Time I Try

Who Will You Love