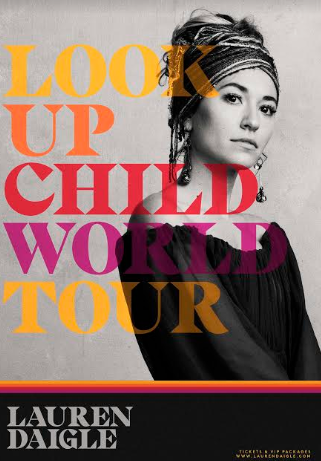 Two-time GRAMMY Award winner Lauren Daigle is extending her sold-out “Look Up Child World Tour” with 19 new stops across the US and Europe. The new shows come on the heels of 53 critically hailed sold-out performances, including shows at New York’s iconic Carnegie Hall and two nights at Nashville’s famed Ryman Auditorium.  Tickets for the “Look Up Child World Tour” will officially go on sale Friday, March 1st at 10 AM local time and can be purchased at www.laurendaigle.com/tour

Daigle’s tour brings to life her Grammy Award-winning album, Look Up Child, with the raw vocal power for which she is known. The “Look Up Child World Tour” will kick off on April 25th in Shreveport, Louisiana and will feature performances at Radio City Music Hall in New York City, The Greek Theatre in Los Angeles, and Red Rocks Amphitheatre in Denver, as well as three hometowns, shows in Lafayette, Louisiana.  The tour will also mark the first time Daigle has toured Europe with dates in Berlin, Amsterdam, Paris, and London.

“How couldn’t I keep this tour going?” said Daigle. “Something that’s been this much fun, with Y’all showing up every night – why stop.  Playing this music live, seeing how everyone’s connecting to the songs, singing along – it’s such an amazing vibe – like having a party with a few thousand of my closest friends every night.”

A limited number of exclusive VIP Packages will be available to purchase. These exclusive offers can include an amazing selection of tickets, exclusive access to a pre-show sound check performance by Lauren Daigle, autographed memorabilia, custom merchandise and much more. American Express® Card Members can purchase tickets in the U.S. and Canada before the general public beginning Wednesday, February 27th at 10 AM local time through Thursday, February 28th at 10 PM local time.

Lauren Daigle is a two-time Grammy Award winner, two-time Billboard Music Award winner, and an American Music Award winner. Her ability to connect with her fans has made her the fastest-selling new artist for her genre of the last decade.  Daigle’s Grammy Award-winning crossover single, “You Say,” has appeared in the Top 40 of Billboard’s Hot 100 chart and her Grammy Award-winning album, Look Up Child, debuted at No. 3 on the Billboard 200 Albums chart.  Her debut album, How Can It Be, has been certified platinum by the RIAA and has produced three certified Gold singles.

All U.S. performances, except for the shows in Lafayette, Louisiana are being promoted and presented by AEG Presents. European dates are promoted by Live Nation.