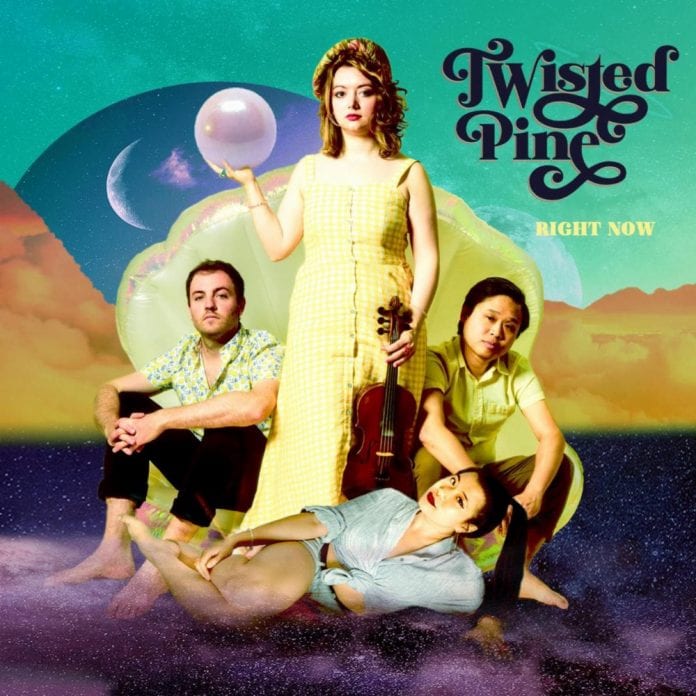 August 14th, 2020 – Boston, MA – Twisted Pine, once a straightforward, Boston-based bluegrass act—has been hard at work, busily evolving into what the Boston Globe now calls “something else, a wider version of a string band; boundary jumpers akin to outfits like Punch Brothers, Nickel Creek, and Crooked Still.” Their influences certainly don’t stop there—Twisted Pine’s collective instrumental and songwriting skills should also be listed in the same echelon of contemporaries like Vulfpeck or Hiatus Kaiyote or Lake Street Dive. Today, their new album Right Now hit shelves and streaming services worldwide. American Songwriter premiered a music video for the album’s first single, “Don’t Come Over Tonight,” doting over the band’s “bluegrass, indie folk-and-funk concoction,” and No Depression said of the album, “Instrumental virtuosity—the band’s calling card—abounds on their latest album, Right Now, but so too do moments of sheer pop glory, funky all-day grooves, and spacecraft sonics.” Fans can now stream and purchase Right Now at this link.

Right Now is ripe with the grooves of 2 am funk jams, the sass of zero-gravity pop, and the astral flute and shoobedoos of 70s radio; all from fairly traditional instruments played in a very non-traditional way. “You could call it, ‘neo-folk indie soul avant jazz jam grass-icana’ but that doesn’t quite roll off the tongue,” says Twisted Pine bassist, Chris Sartori. The band is among a new generation of line-blurrers; musician musos who don’t see any reason not to let their influences mingle and meander off the beaten path. Album opener “Right Now” feels as if Twisted Pine hired a drummer for the new album, but that’s just Sartori’s bass and Dan Bui’s mandolin chop effortlessly holding down a backbeat heavy groove under Kathleen Parks’ singing and fiddling and tasteful flourishes from Twisted Pine’s newest member, flutist Anh Phung.

“Amadeus Party” comes next—it’s “what happens when the Punch Brothers meet Jean-Luc Ponty and Ian Anderson,” wrote Folk Alley. After that comes the indie-rock island music vibe of “Papaya,” completing a near-perfect triangulation of what Twisted Pine’s sound is all about; an all-encompassing appetizer hinting at the album to come. Of course, the band had to add a little of Phung’s flute skills to a ripping bluegrass tune—something they’ve been sure not to leave behind while journeying into their own sound. “Come Along Judy” is just that, another opportunity for Twisted Pine’s musicianship to shine, this time over a tune penned by bluegrass fiddler Tex Logan. There’s a Father John Misty cover in there too, along with a short instrumental that starts in reverse—also, a song named after a Brazillian Steakhouse which started as a green room jam on tour.

Through the whirlwind of vibes, styles, and skills, Twisted Pine really gets their point across on Right Now. The band is capable of chasing whatever musical inspirations come their way without ever losing their signature sound—definitely a sound of their own, but one which nobody can quite pin down—that’s the way they like it. “The music is easier to feel than it is to describe,” Sartori says. “Genre is a construct anyways, right?”