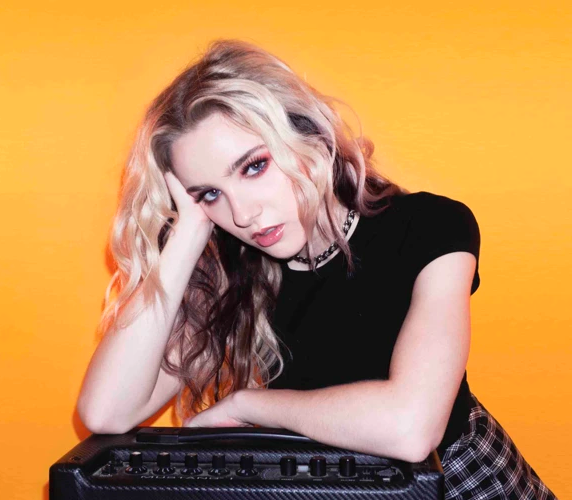 Toronto, ON – Vancouver dark pop singer-songwriter Rayne is set to release her EP False Love on July 30 via all streaming platforms. At just nineteen, Rayne is gaining attention from fans and the music industry alike. Her catchy, heavy-hitting pop choruses, witty, relatable lyrics, and soaring vocals have also caught the ears of Top 40 radio programmers with early support coming from across Canada for her singles ‘Do With That’, and ‘Envious’.

The six-song EP opens with ‘Is It Cool If We’re Lonely’, a dark pop track written by Rayne and Tavish Crowe (Carly Rae Jepsen). The song tells the story of an introverted person realizing the importance of being vulnerable and opening up to the people around you.

“My favourite song on the EP is ‘Is It Cool If We’re Lonely’, which I wrote with Tavish over Zoom. It’s the fastest written song to be featured on ‘False Love’ as we had entirely finished writing it in less than two hours,” said Rayne. “As soon as Tavish sent over the demo, I immediately knew I wanted this song on the EP. It’s slightly more dark-pop than all of my prior releases, but it’s a direction that I very much see myself shifting into in the future.”

‘Envious’, the first single from the EP, received over one million radio impressions after being added to KiSS’ radio stations in Toronto, Winnipeg, Ottawa and Kingston. Also written with Tavish Crowe (Carly Rae Jepsen) and Ryan Stewart (Carly Rae Jepsen, Jocelyn Alice), this dance pop track was inspired by a call with one of Rayne’s friends after she’d seen her ex out with someone new.

“Writing the songs for False Love was really a learning experience for me. I grew so much as an artist and writer over the process, and I think you can hear that growth throughout the tracks”, said Rayne, “There’s some stylistic variety as I was figuring out that really hard dilemma of what I wanted my sound to be. I think I’m a lot closer to that answer now than I was when I first started writing the EP.”

Rayne first started co-writing in late 2018, working with the likes of Tavish Crowe, Andrew Allen, Troy Sampson, Brian Howes, and Ryan Stewart. She quickly found her groove, creating cleverly written songs that balance catchy, heavy hitting choruses and rhythmically driven tracks with lyrics that discuss the darker, sadder aspects of relationships. Her original batch of demos was sent off to an executive at Live Nation Toronto, where she secured her spot playing pre-show for GRAMMY Award winner Billie Eilish in 2019, and later Tyler Shaw in Vancouver.

Her first songs were also sent to Timbaland Productions / Mosley Music Group in LA. After hearing Rayne’s vocals and writing style, they asked her to write topline on tracks by MilliBeatz, a Zurich based producer who has created tracks for Bryson Tiller, Kehlani, Migos, and Rihanna. From there emerged her second single ‘The Low’, which has been streamed over 350,000 times on Spotify since its release early last year.