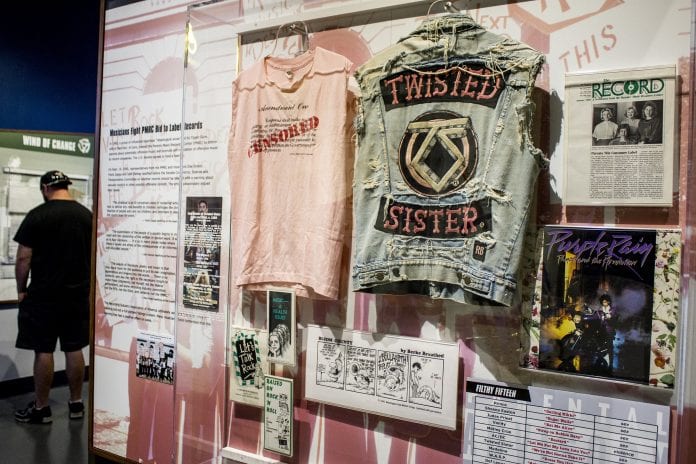 GRAND RAPIDS, Mich., Sept. 29, 2017 – The Gerald R. Ford Presidential Museum and Foundation will be bringing a glimpse of the Rock & Roll Hall of Fame to the Ford Presidential Museum this November with an exhibit that explores how rock music can change attitudes about patriotism, peace, equality, and freedom. The exhibit, “Louder Than Words: Rock, Power, and Politics” will open with a members-only reception on Nov. 8 and will be on view to the public through Feb. 11.

The Rock & Roll Hall of Fame in Cleveland, Ohio, and the Newseum in Washington, D.C., partnered to create this one-of-kind exhibit. The Gerald R. Ford Presidential Museum’s presentation of “Louder Than Words: Rock, Power, and Politics,” marks its first stop outside of the two iconic partnering museums. The exhibit first premiered on May 20, 2017, at the Rock Hall and was on display at the Newseum during the 2017 presidential inauguration through July 31.

Video, multimedia, photographs, periodicals, and artifacts, such as Bono’s 2002 Super Bowl jacket will be displayed.

Performing at the Super Bowl in the wake of the 9/11 attacks, U2 paid tribute to the victims by projecting their names on a massive backdrop as it played “Where the Streets Have No Name.” Bono wore the jacket during the performance; the jacket’s stars-and-stripes lining serves as an additional homage to the victims.

“‘Louder Than Words’ highlights how artists have used their craft as a platform to express their views and shape public opinion,” said Greg Harris, president, and CEO of the Rock & Roll Hall of Fame.

The exhibit explores how artists exercise their First Amendment rights, challenge assumptions and beliefs, stimulate thought and effect change. Beyond music’s influence on the civil rights movement, the Vietnam War, and gender equality, the exhibit also features other significant moments and figures.

“We are honored to have the opportunity to partner with the Rock & Roll Hall of Fame to bring this exhibition to the region,” said Elaine Didier, director of the Gerald R. Ford Presidential Library and Museum.  From ex-Beatle George Harrison’s visit to the White House to stories of Steve Ford playing Led Zeppelin music from the White House roof, rock music had a definite history during the Ford presidency.

“Louder Than Words: Rock, Power, and Politics” will open 6 p.m., November 8, with a Friends of Ford members-only preview reception. Membership to the Friends of Ford is available online at geraldrfordfoundation.org/donate, or by calling 616-254-0396. This exhibit will be included as part of the Museum’s regular admission fees.

For more information about the Rock & Roll Hall of Fame and its traveling exhibits, visit https://www.rockhall.com/visit/exhibits.

About the Rock & Roll Hall of Fame:

Rock Connects Us. Our mission is clear: To engage, teach and inspire through the power of rock and roll. We share stories of the people, events, and songs that shape our world through exhibits, innovative programs, and concerts. Join the millions who love it as much as you do. Experience us live or online – Visit rockhall.com or Facebook, Twitter and Instagram (@rockhall). Long Live Rock!

The mission of the Newseum is to champion the five freedoms of the First Amendment through exhibits, public programs, and education. It is the only institution in the world dedicated to championing the five freedoms of the First Amendment; religion, speech, press, assembly, and petition. One of the top attractions in Washington, D.C., the dynamic, engaging and interactive experience offers seven levels of exhibits that encourage visitors to consider the evolution of freedom of expression and to explore the meaning of freedom in an age of continual technological disruption. The Newseum is a 501(c)(3) public charity funded by generous individuals, corporations, and foundations, including the Freedom Forum. For more information, visit newseum.org or follow us on Facebook and Twitter.

About the Gerald R. Ford Presidential Library and Museum:

The Gerald R. Ford Presidential Museum brings American history to life for students of all ages.  Here all are welcome to enjoy, to learn, and to participate in our national heritage.  The Museum offers historical material through interactive exhibits, sparking curiosity and enthusiasm about our nation’s history and government.  Programs, school tours, and historical performances are also offered.  The Museum is operated by the National Archives and Records Administration with support from the Gerald R. Ford Presidential Foundation. For information visit fordlibrarymuseum.gov

The Gerald R. Ford Presidential Foundation fosters increased awareness of the life, career, values, and legacy of America’s 38th President.  It does so through activities designed to promote the high ideals of integrity, honesty, and candor that defined President Ford’s extraordinary career of public service. The Foundation promotes the ideas, values, commitment to public service and historical legacy of President Gerald R. Ford and further promotes greater civic engagement and recognition of integrity wherever it exists in the public arena.  It supports permanent and changing exhibits designed to promote historical literacy; conferences; educational outreach and other programs, both scholarly and popular, including at the Gerald R. Ford Presidential Library and Museum.