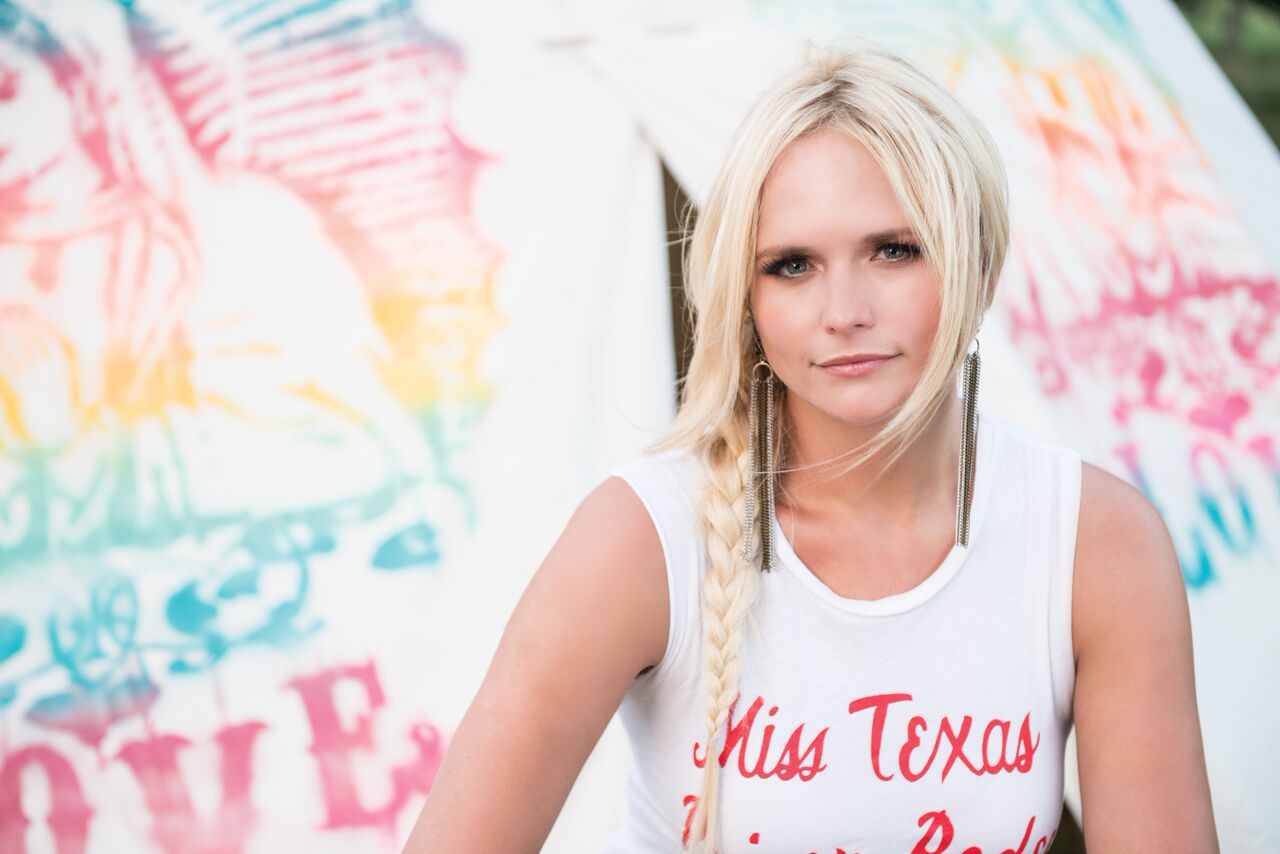 The Livin’ Like Hippies Tour receives its name from the lyrics of Lambert’s aptly titled song “Highway Vagabond” which appears on The Nerve side of Lambert’s 24-song, a double album, The Weight Of These Wings.

The new album, The Weight Of These Wings, is the Texas native’s sixth studio album and since its release in November 2016 the record has been certified PLATINUM by the RIAA, spawned two GRAMMY Award nominations for its lead single “Vice,” been awarded the ACM Album of the Year, and most recently racked up FIVE nominations for Lambert at the upcoming CMA Awards including a coveted Album of the Year nod.

Live Nation is the official promoter of the Livin’ Like Hippies Tour and tickets for eight of the shows go on sale October 6 and can be purchased at LiveNation.com or Ticketmaster.com. The Livin’ Like Hippies Tour will take the critically acclaimed troop to 23 cities including Atlanta, Los Angeles, Phoenix, Cleveland, San Diego and Kansas City to name a few. See bottom for a full breakdown of dates and artists performing.

Citi® is the official pre-sale credit card of the Livin’ Like Hippies Tour. As such, Citi® cardmembers will have access to purchase pre-sale tickets beginning Tuesday at 10 am local time prior to the general public on sale through Citi’s Private Pass® program. For complete pre-sale details visit www.citiprivatepass.com 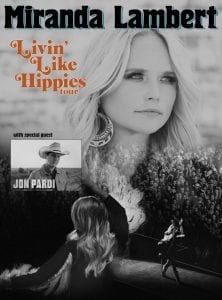 The Texas native released her most recent effort, a double album titled The Weight of These Wings in November 2016, which debuted at No. 1 on the Billboard Country Albums chart. She touts six studio albums to her repertoire; Kerosene (2005), Crazy Ex-Girlfriend (2007), Revolution (2009), Four The Record (2011) and Platinum (2014), the latter earning Lambert a GRAMMY Award for Best Country Album, in addition to her previous GRAMMY win for Best Female Country Vocal Performance in 2010 for “The House That Built Me.”  The first song released from The Weight Of These Wings, “Vice,” received multiple Grammy and ACM Award nominations. Her third single, “Tin Man”, is currently at Country Radio. www.Mirandalambert.com

About Jon Pardi:
Capitol Records Nashville’s Jon Pardi is one of country music’s fastest-rising new stars. Pardi’s sound is undeniably country, and his laid-back, fun-loving approach towards life comes through in his music and his raucous live show. The California native’s charisma and authenticity strike a chord with country audiences and fellow artists alike. Pardi has toured with Luke Bryan, Eric Church, and Zac Brown Band; he was hand-picked by country legend Alan Jackson to join him on his 25th-anniversary tour; he is currently on the What the Hell World Tour with Dierks Bentley and Cole Swindell.  Pardi was named this year’s ACM New Male Vocalist of the Year and recently received three CMA nominations, including one for Best New Artist.

Pardi’s latest album,California Sunrise, debuted at No. 1 on the BillboardCountry Albums chart and includes his very first No. 1 single, the Platinum-selling “Head Over Boots,” along with the three-week No. 1 smash “Dirt on My Boots,” and Pardi’s Top 3 current radio single “Heartache on the Dance Floor.” The album landed on multiple “Best of the Year” lists including those from Rolling Stone, Music Aficionado, The Tennessean and NASH Country Daily.California Sunrise is the follow-up to Pardi’s highly-praised debut, Write You A Song, which also landed on several “Best of” lists including the Los Angeles Times’ Mikael Wood’s all-genre Top 10 and both Rhapsody’s and Taste of Country’s Top 10 Country Albums. Additional hits include the Top 10 RIAA Gold-certified single “Up All Night,” “When I’ve Been Drinkin,’” “What I Can’t Put Down,” and “Missin’ You Crazy.”