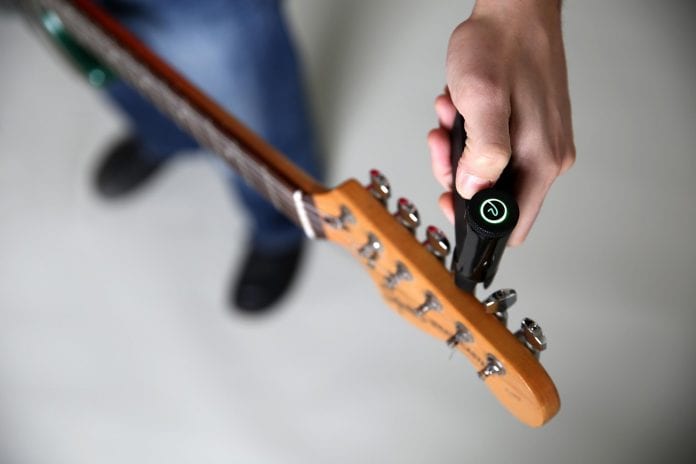 Band Industries launches Roadie 2, their redesigned automatic tuner, on Kickstarter today. Just place it on the pegs and it will automatically tune your guitar in seconds!

March 28, 2017 (New York, NY) — Beginner guitarists are almost always frustrated with not knowing how to tune their guitar. Meanwhile, touring musicians spend vital minutes during sets to manually switch their instrument from one complicated tuning to the next. No matter your experience level, tuning can be a chore and take time away from playing.

Today Band Industries announces the release of Roadie 2 on Kickstarter, an upgraded version of their original automatic guitar tuner. Proven to be 3x more accurate than the human ear, it takes the guesswork out of tuning by doing it for you. It is as easy as a place, pluck and twist.

When put on any of the pegs, it analyzes the vibrations from a plucked guitar string to know its current pitch. Then, its motor rotates the peg until it’s perfectly tuned. It takes just 30 seconds to tune an entire guitar into any alternate tuning you choose. This process can be easily duplicated to offer musicians of all experience levels the best sound their instrument can produce.

View the promo video for the brand new Roadie 2:

“I think the concept is fantastic,” says Spike Edney, who played guitar live with Queen. “You don’t know how bloody difficult it is to keep a twelve string in tune. As far as I’m concerned, this is a major leap forward.” Edney is just one of many well-known musicians who have testified to Roadie’s powerful capabilities. Others include guitarists from Drowning Pool, Grand Funk Railroad and The Cars.

With a brand new OLED screen and knob interface, Roadie 2 is now simpler and easier to use. The compact design and powerful hardware can tune electric, acoustic, classical, and steel guitars, 7 and 12-string guitars, ukuleles, mandolins and banjos. For bass guitarists, Band Industries is also announcing a bigger, more powerful version known as Roadie Bass.

It also keeps track of tuning stats and each string’s quality to notify you when it’s time to change them out. When that time comes, Roadie 2’s motor can even help you restring your instrument with an automatic winding feature boasting a 60-RPM rotation speed.

Built with a 300:1 gear ratio motor, the lightweight, pocket-sized device is strong enough to turn even rusty pegs while the motor’s micro movements ensure excellent precision. A lithium battery powers Roadie and can be recharged via USB-C.

Roadie 2 has a detection range of A1 (55Hz) – A5 (880Hz) along with a detection accuracy of less than ±1 cent. Roadie Bass detects from A0 (27.5Hz) to A4 (440Hz). The tuning accuracy of both is estimated to be ±2 cents. With Roadie’s new vibration detection, users can achieve the same quality of tuning even in noisy environments such as a concert hall.

The original Roadie Tuner saw major success when it tripled its funding goal on Kickstarter in 2013. It has since won numerous awards and helped tune over 2 million strings. Now, Roadie 2 expands on everything the first Roadie started by adding vibrational tuning detection and haptic feedback among other new features. It gives users more freedom, offering the perfect tune without the need of a smartphone.

Available today on Kickstarter, the campaign will go on for 60 days with a fundraising goal of $50,000. Early backers can pledge $79 for a Roadie 2 or $99 for a Roadie Bass. Band Industries will deliver worldwide and is expected to ship in October of 2017. Backers get a 30-day money back guarantee and a 1-year warranty for all Roadies. For more information, visit their website.

Band Industries is dedicated to building the next generation musician’s toolkit. The company was founded by Hassane Slaibi and Bassam Jalgha and has offices in both Seattle and Beirut. Slaibi and Jalgha decided to combine their passions for music and tech by developing the company’s first product, the Roadie Tuner, in 2013. It garnered worldwide attention and accolades, including the TechCrunch Disrupt 2014 Audience Choice Award. The company is now reaching their next milestone with Roadie Tuner 2 and continues to enrich the lives of musicians through tech.