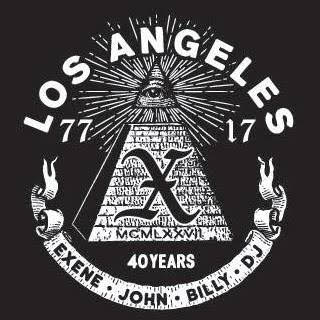 X 40 Year Grande Finale announced with their annual Holiday run of shows.  Beginning with a Los Angeles show on November 22nd at Novo with a stellar line-up including Dave Alvin and the Guilty Ones, Alejandro Escovedo and Mike Watt opening the night.  The band will then pick up before the Christmas holidays with the final 2017 dates beginning December 22nd in San Diego before heading north to Santa Ana, Seattle, Portland and finally winding up in San Francisco on December 30th, bringing their 40th Anniversary celebration to a close.  See below for full itinerary and opening bands, all tickets will go on sale tomorrow (October 6, 2017).

X has filled this Anniversary year with many unique celebrations.  In addition to playing  tour dates across the country, they made a special appearance at the L.A. Dodgers vs. Chicago White Sox game in mid-August where John Doe led the National Anthem and Exene threw out the ceremonial first pitch, they launched a Kickstarter campaign on August 15th to release their first ever – original lineup – live album,X! Live in Latin America, exclusively through the campaign. With an original goal of raising $50,000 set, the band easily exceeded that with a final tally of over $161,000 when it ended on September 29th. In addition, next week, on October 11th the band will be celebrated by the City of Los Angeles with a special proclamation to each band member in a ceremony at City Hall and on October 13th the seminal L.A. punk band will be celebrated with an expanded Grammy Museum Exhibit featuring an exclusive rooftop concert that evening.

X: 40 Years of Punk in Los Angeles will be displayed on the second floor in the Museum’s Special Exhibits Gallery, set to open on Friday, Oct. 13, 2017. With more artefacts and space than previously planned, the exhibit will give visitors a glimpse into how X’s four original members – Exene Cervenka, John Doe, Billy Zoom, and DJ Bonebrake – quickly established the band as one of the best in the first wave of L.A.’s flourishing punk scene.

In 1977, X quickly established themselves as one of the best bands in the first wave of LA’s flourishing punk scene; becoming legendary leaders of a punk generation.  Featuring vocalist Exene Cervenka, vocalist/bassist John Doe, guitarist Billy Zoom, and drummer DJ Bonebrake, their debut 45 was released on the seminal Dangerhouse label in 1978, followed by seven studio albums released from 1980-1993. Over the years, the band has released several critically acclaimed albums, topped the musical charts with regularity and performed their iconic hits on top television shows such as Letterman and American Bandstand.   X’s first two studio albums, Los Angeles and Wild Gift are ranked by Rolling Stone among the top 500 greatest albums of all time.  The band continues to tour with the original line-up of John Doe, Exene Cervenka, Billy Zoom, and D.J. Bonebrake. http://www.xtheband.com/

*Dave Alvin and the Guilty Ones, Alejandro Escovedo and Mike Watt opening