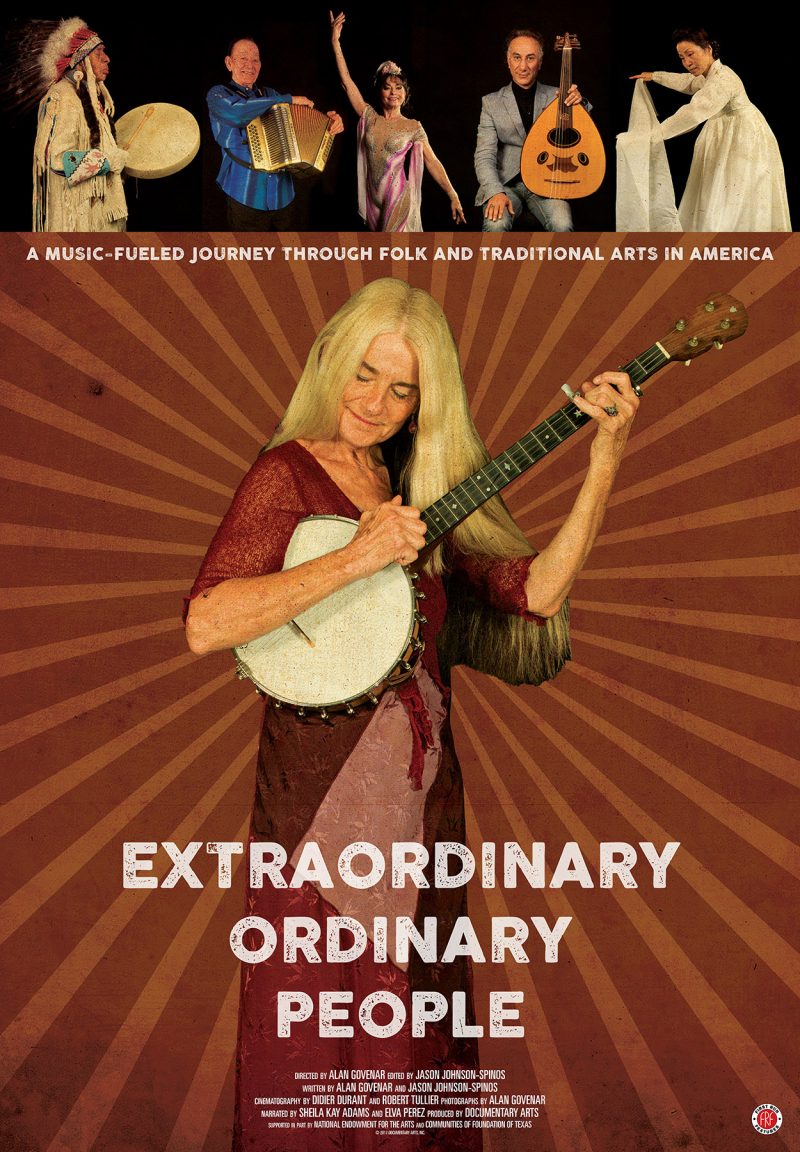 A must-see documentary into the history and honorees of the National Heritage Fellowship by the National Endowment for the Arts will open at New York’s Cinema Village on Friday, September 15 with additional dates for the week, followed by screenings at various cities across the country to be announced.  Attendees at the Friday and Saturday evening screenings of Extraordinary Ordinary People will be treated to a performance by musical artists Sheila Kay Adams and Sidiki Conde who are featured in the film.  Filmmaker, Alan Govenar, will also be onsite following the screening for a Q&A.

Sheila Kay Adams is a seventh-generation ballad singer, songwriter, banjo player, and story teller from the Sodom Laural community of North Carolina.  Sidiki Conde is an African immigrant residing in New York with severe physical deformities as a result of contracting polio as a teenager which left him almost completely paralyzed.  Unable to utilize his feet, Conde taught himself to walk on his hands.  He is a performing artist and is known for the documentary You Don’t Need Feet to Dance, by the same filmmaker of Extraordinary Ordinary People, which showcases his daily life maneuvering the streets of New York City.

I had the opportunity to preview this “extraordinary” documentary where I found myself mesmerized by the stories of the individuals featured in the film on their passion, how their art contributed to shaping the fabric of America, and how the National Heritage Fellowship affected their lives.  The commonality among those featured in the film was their love for their art that has been passed down through generations and their desire to keep their traditions alive for generations to follow.  I was so touched by this film, that I found myself in tears by the end and wanting to hear more of their stories.

The National Heritage Fellowship has been awarded annually since 1982, and in 2011, was on the verge of distinction had it not been for individuals dedicated to art that brought this to the attention of the National Endowment for the Arts and fought for their continued existence. Their argument was that the Fellowship was not just an awards program, but a “strategic component of building a healthy folk and traditional arts field and world in the United States.”

The film opens with snippets of photographs and videos of the artists that will be shown throughout the film as the tag line “Traditions Define Who We Are” scrolls across the screen.  I find this statement profound as America is a melting pot of different cultures and traditions brought here by immigrants from many countries throughout the world.  It’s what makes America unique and great.

Sheila Kay Adams’ is the first to be featured in the film where she plays the banjo and talks about her upbringing where music was central in her life stating that family and friends were always around singing and playing banjo, fiddle and guitar, and dancing to the tunes.  The documentary goes on to show musicians from the various genres of music from the beginning of blues to bluegrass to rockabilly to gospel, Cajun, creole, and zydeco.

Not only were musicians bestowed with this prestigious award, but so many other forms of art were recognized.  Dancers, an aerialist, basket weavers, quilters, woodworkers, and a bobbin lace maker are all seen creating some of their masterpieces.  Even a master shipwright received the award in 2016.

I was particularly pleased to see the women who were recipients of the Fellowship.  Sheila Kay Adams on her banjo and folk music; musician and guitar virtuoso Lydia Mendoza made her mark in the conjunto, Tejano genre; guitarist Wanda Jackson spoke of her influences from rockabilly music, including Elvis, and her gospel background; Native Hawaiian Genoa Keawe on the ukulele; as well as singers Koko Taylor (blues), Albertina Walker (gospel), “Queen” Ida Guillory (zydeco accordionist), Flory Jagoda (Sephardic musician plays guitar and accordian); along with several female quilters, dancers, and weavers.

Another great woman featured in the film is the former Director of Arts and Folk for the NEA from 1977 to 1992, the late Bess Lomax Hawes (1921-2009), who started the National Fellowship Program and discussed the impact on recognizing artists in this genre.  She played guitar, banjo and mandolin.

Charles Carrillo from Santa Fe, New Mexico, a wood carver of the art called Santero that carves and paints saints, said it best.  “We are not famous artists, we are just normal people maintaining tradition.”  He spoke of his love for his craft and does not think of it as a job.  This was a common theme of all the artists throughout the documentary.

There were so many great artists/craftsmen featured in this film.  I touched on a few of them, but there’s so many more to hear from in this highly informative one hour and 22-minute documentary by First Run Features.

If you’re in the NYC area this weekend, I highly recommend you check out this film.  If not, go to the website HERE to see if it’s coming to an area near you!