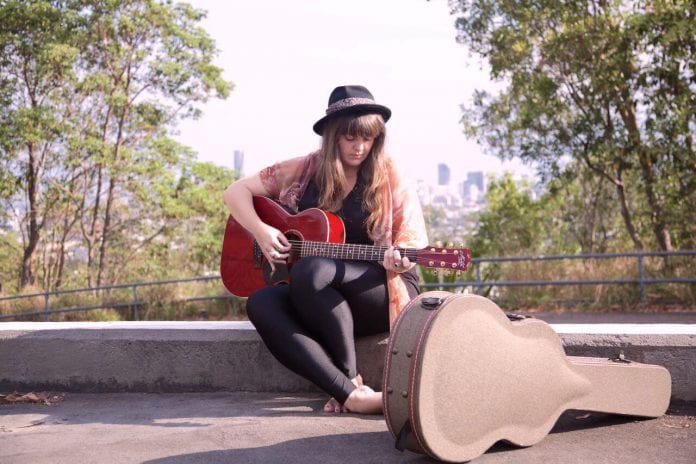 My name is Sue Ray and I’m an independent indigenous singer-songwriter based in Queensland, Australia. I’ve been performing professionally for over ten years and in that time have dabbled in many varied genres. Early in my career, I was quite the metal head so my first few bands were predominantly all-female rock bands where I played electric guitar, then I gravitated to bass for a while when I was in a Rock’A’Billy band The Fondelles, then later in my 20s, I started to move back to my roots. My early musical influences were heavily entrenched in old-school country music, so I started playing acoustic guitar again and playing my own style of country that was a blend of blues, folk, dark murder ballads and old school country that has over the years been given the title “Americana.”

After I graduated high school, I moved to Brisbane to study sound engineering, video production and Diploma of Film and Television. I also completed a Certificate IV in Contemporary Music at Southbank Tafe (eloquently titled “Rock School”) where I actually met and became great friends with an incredible performer and someone I’m so proud of and influenced by today, Sash The Bash, who is based in Atlanta, Georgia now.

I have released three critically acclaimed albums: Best Beware in 2008, Red Roses in 2011 produced by Aria award winner Magoo, Live At The Junk Bar in 2017 recorded and co-produced by renowned engineer Jamie Trevaskis, followed by an EP titled I Would Never Do That recorded live in Nashville by Pal Sheldon at Artec Sound Vision Productions.

In the past five years, I’ve been fortunate to have a number of awards and nominations, from “Most Promising New Talent” in the 2013 Deadly Awards to “Female Artist Of The Year” in the QLD Music Awards that same year.

In 2012, my album Red Roses was nominated for “Country Album Of The Year” in the AIR Independent Music Awards Australia, and later that year my single “Lover Evermore” received the award for “Best Indigenous Track” in the QLD Music Awards.

I’m not known to be an artist that sticks to one sound or genre. Some agents have worried that I might confuse my audience by not sticking to one specific style, but I’ve found it actually works in my favor. Being diverse, I am able to perform at many varied concerts or festivals ranging from Blues festivals, Folk Festivals, and Country Music Festivals so it’s actually been a blessing. Quite often, the feedback I receive from fans and patrons at my shows is that they love the diversity through my set as the range of song styles keeps them interested and on and their toes.

I’m so blessed to come from a musical family. My father is a huge inspiration and influence in my life. He played in a band for over 50 years and thanks to him, I was immersed in music nearly every day of my life. He was also chairman of my hometown Country Music Club, so every week I was listening to or performing the country classics. He also taught me how to play guitar, roll a guitar lead, use a microphone and set up a PA. I am so lucky to have such a solid foundation.

In my teens, which thankfully was the ‘90s, I was really influenced by music that had strong driving rhythms and intense lyrical content. Pantera, L7, Nine Inch Nails, Babes in Toyland and The Cure were some of my favorite bands, but I was particularly taken with Tori Amos and Melissa Etheridge. I can actually hear all of those influences in my music today. When I was 15, a friend gave me an album of Nina Simone’s greatest hits and to this day, I listen to it often. Her voice, her lyrics and the intensity of her performances are a big influence to me, so much so that when I asked to perform at a show called “Live Spark” in Brisbane years ago where a local artist is asked to perform their favorite album start to finish, I chose Nina Simone’s first album, surprising everyone who’d imagined I’d do Patsy Cline or Chris Isaac. I might be known these days as a “country artist,” but my influences are diverse and often contradictory.

Of late, my sound has been getting darker and crossing over that border of murder ballad and stoner rock. Although I use an acoustic guitar, I’ve gradually built up quite a large pedal board ranging in effects to help create my own unique sound and build the vibe and mood in my set. I used to get the sound engineer to just add some reverb to my guitar and voice, but these days I choose to use my own effects.

My guitar is an Australian made Maton EBG808 in Cherry Red with Gold Hardware. My father used to own a musical instrument store where he sold them, so he had it custom made by them for me. I often get called the “girl with the red guitar.” When I travel, I take my Maton Mini Diesel which is an amazing guitar. Although it is small, it has an AP5 pick-up, which puts out a huge sound often surprising unsuspecting sound engineers. Being a smaller body, it works well with all of the effects I’m using and doesn’t get that boomy feed-back loop that you can get with bigger guitars.

If I’m able, I also prefer to use my own guitar amp rather than go direct through a PA and I’m currently using a VOX AC30.

I also have a set of Hohner harmonicas in every key at my disposal and am proud to say, I’m actually pretty good these days. 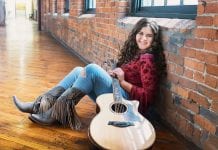 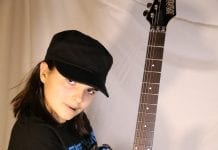 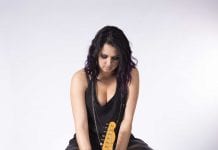