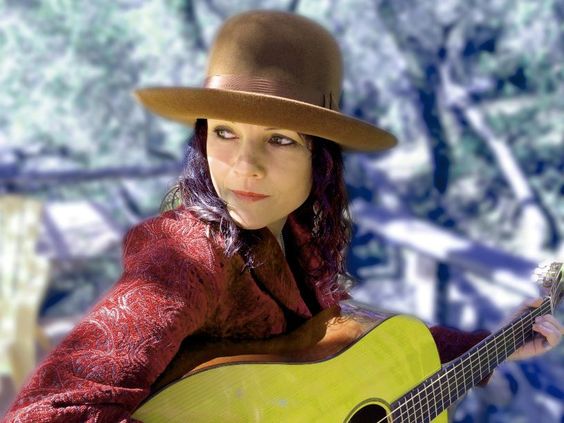 After leaving home at the young age of 15 with her guitar in hand, Corinne West has spent her time pursuing her passion for music and art.

A fourth generation Californian residing in San Francisco, West traveled across America as a young teenager in a converted school bus pursuing her dream of music. That experience resulted in years of experience in performing, songwriting, collaborating with new artists, working in theatre, and developing her artisan skills by working with glass, metal and other forms of art, including restoring bi-plane wings.

Throughout this time, West has been fortunate enough to surround herself with many talented musicians and has released several albums on her own Make Records label including Bound for the Living (2004), Second Sight (2007), The Promise (2009), Magnetic Skyline (2010), and her recent release Starlight Highway (2015).

Starlight Highway was produced by West and was released in May. The album features dreamy ballads and upbeat folk tunes weaving West’s adept skill at story-telling, her angelic vocals, acoustic guitars, and other fine instrumentation by the extremely talented musicians she pulled together to create the ten beautiful tracks chosen for this five-star production. It’s a work of art definitely on our playlist.

Learn more about the inspiration behind the new album and the artists that helped create West’s latest release – and about her artisan skills with restoring antique bi-planes!

Starlight Highway, which is your latest release, was recorded after a year-long sabbatical which you spent in Austria. Did that time help inspire this new album?

My time in Austria did indeed bring fresh colors to Starlight Highway. While catching my breath from full-on touring, I pursued other art-forms that I love, and that felt neglected. Austria granted me an Artist in Residency visa so I was able to stay in the country for a year to create. I did put together a band of Austrian musicians and we did a monthly gig in a big club in Wels. That was a trip, as half the musicians didn’t speak English. All of this was a learning curve. A growth cycle. When I returned to America, I was changed by my experiences, and some of those changes found their way onto the current record.

Tell us about Starlight Highway, the writing and recording process as this was your first completely self-produced record, I believe. How was that experience?

I have co-produced projects in the past, and I must say that self-producing has its grand rewards and intricate challenges. The process of orchestrating the songs, deciding on the textures, instrumentation, nuances, dynamics, length, vibe, how it all is mixed down, etc., is an amazing process. When fully immersed in the process, time bends and the tones and music go from dancing around in my head and soul, to being recorded, to going back into my body and soul when I listen. It’s incredible to fulfill one’s sonic “vision” (as if ears had eyes.) On the other end of the spectrum, the options are endless in the studio. It is a fine line to stay in tune to the fluidity of the art, while at the same time running a session, seeing a technical idea through and keeping an objective perspective as the producer. There is a special dance up in that process that I had to find as my own dance partner. When done well, the result serves the art, and the details of making a record.

You gathered quite a talented group of musicians to contribute to Starlight Highway. How did you go about choosing these contributors?

I wanted to bring in friends and musicians that I had worked with in the past, and a few musicians I had never worked with. Kelly Joe Phelps and I had recorded and toured in a duo project for 2 years. Mike Marshall produced Second Sight, my second record, so we had some serious time working together a few years back. John Burr was on that recording, so I asked him to be a part of Starlight as well. Joe Kyle Jr. and I have worked together in the studio and he has toured with me. Ricky Fataar was referred for drums and he slammed it and we had some good laughs. Edo Castro was in my band for a short spell… it kind of went like that with everyone. I was very clear that I wanted to work with people with great energy, good intuition, and who I thought would enhance these particular songs with their talent. I couldn’t be more pleased. A most important and often over-looked person in this regard is my engineer, David Luke. His skills and energy and our symbiotic relationship is rock solid. Put it all together, Shake… and Boom. It happened.

In a press release for the announcement of your new album, you mentioned that you wanted to create songs that moved your music forward in a new direction, while still keeping with what you’ve done in the past. Share with us more about what you wanted to accomplish?

Starlight Highway is my 5th record. Somehow musically I have turned a corner, but before totally embracing the new musical forest I find myself in, I wanted to touch on where I have been. Second Sight had major bluegrass overtones. Bound for the Living was more rooted in pure Americana, The Promise started to focus more on vocals and I went in new directions with my songwriting structures. My project with Kelly Joe Phelps was my first, well, and his first I believe, collaboration in touring, writing and recording. All of the above elements ended up on Starlight Highway. Paying tribute to the past, while recording songs like ‘Monday’s Song’, which is very paired down for me, using totally new instruments like the Wurlitzer and the piano, and self-producing the project while designing the landscapes of the songs, well, it gives glimpses on what’s coming next and gives my hats off to the people I have worked with and the music I have made thus far.

That question ties into the overall vibe of the album – folk ballads, a few upbeat songs like “Starlight Highway,” and a couple of songs with a bit of a country sound like “Cry of the Echo Drifter.” I really like the variety of the songs and the instruments – the mandolins and keys really add a nice touch.  You also perform with The Bandits. Tell us about The Bandits, when it was formed and band members.

Like many writers and singers I surround myself with different talents, and often rotate the musicians in the Bandits depending on the tour or the recording project. My last release show at the Freight and Salvage in Berkeley was a six-piece band, while this week I will perform with one Bandit. I enjoy both approaches; the big band, and the intimate sound. I like to mix it up. I dig having consistent group of band-mates as well. It simply takes a certain magic for that to happen. I keep my ears open.

You left home at 15 with your guitar in hand to pursue your love of music. When did you first learn to play the guitar and why the decision to leave home at such a young age?

I was a bit of a wild child. I’m not sure that has changed actually. It just looks different. I dropped out of high school and lived amongst a strong group of counter-culture radicals. I was very young, but what I was learning in high school is what happens to a young person when they are not stimulated. When they are floating out on the cliffs of the system. When they are highly creative and they are forced to sit and shut all of the voices inside of them up, and behave. It just didn’t work for me. I had dreams. I knew there was more. I didn’t know where it was, but I knew it existed, so I dropped out of conventional society, traveled America in a converted school bus, played that guitar, and let the world be my classroom.

Who were some of your musical influences at that time in your life that inspired you musically and artistically?

At that time I was listening to Crosby Stills and Nash, (and Young), The Byrds, Judy Garland, The Grateful Dead, The Silly Sisters, Light Rain, Donovan, Peter Gabriel.

The bi-plane wings were something obscure and wonderful to work on. I was maybe, 18 or so, and my job in the hanger was to pull the fabric over the wings, and smooth it all out with heat, and attach it with glue. It was a bit of a miracle to then sit in the back of the bi-plane while my boss at the time took me up in the air on special occasion to loop around and around, on wings I made. We are all doing a bit of that perhaps.

Throughout your career, what’s one of the biggest lessons you’ve learned that you would like to pass on to someone wanting to become a professional musician?

Find your voice. Let the music you love wash over you, but find your voice. Let it come out of you, listen back to it, and hone it. Continually. Form a relationship with your music. This relationship becomes a spiral that in my world never ends. There is nowhere to arrive to, there is only the adventure of music, and no one on the planet can create what is waiting to come out of your body and soul.

For more on Corinne West, visit her site HERE.