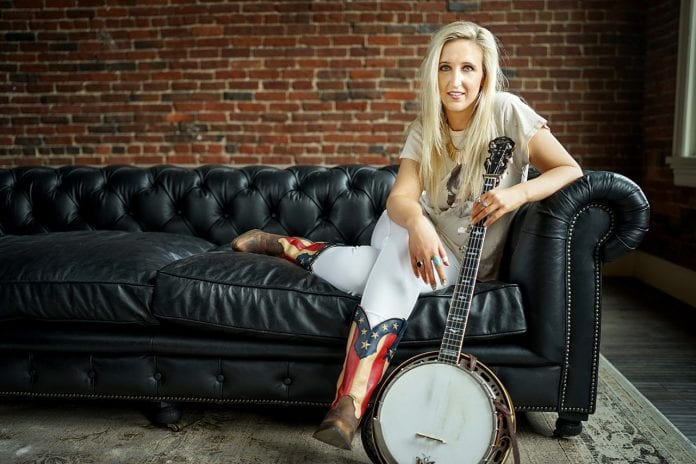 Equipped with her dad’s 1972 Gibson Mastertone, Lockwood Barr was born to be a musician. Initially inspired by her musical parents, Barr has kept the family tradition alive through her songwriting and impressive talent. Happy to sit down with us at CMA Fest, Barr delved into the importance of vulnerability and practice within the art of songwriting. Excited for what the future has in store, Barr is prepared to continue spreading her music and inspiring other girls to pick up a banjo.

It’s been great. This year is a bit different. I’ve been on the road so much that this is the first day that I’ve been able to come. I’m so glad I was able to make it because it’s such a special time of year. Plus, CMA fans are always so incredible. They’re already starting to get behind the new music, which is awesome.

What inspired you to begin playing the banjo?

I grew up in a really musical household. There was something like 17 instruments in the living room! My mom played dulcimer and piano, and my dad plays banjo. I have his banjo, and I get separation anxiety from my instruments, so he must really love me to let me have his. He bought it when he was a teenager; it’s a 1972 Gibson Mastertone. He does, however, like to remind me that it’s on loan. He was able to come out for a few of the CMA Fests in past years, and I would bring the banjo to the booth between shows. People were always curious about the banjo, and I love to inspire kids to start playing. It’s funny though because someone will complement the banjo and my dad will come out of nowhere and claim it as his. It’s hilarious. But my mom grew up in Nashville and sang professionally for a time in college. She would come home during summers and do festivals. She actually backed up the Dillards and stuff, so I feel very grateful. Even though my parents were business people and went to grad school and everything, they were always very open to me playing. When I told them that I wanted this to be my career, they were always on board. Basically, I was surrounded by really wonderful musicians growing up.

What female performers do you admire?

My mom and dad got me hooked on Emmylou Harris, Bonnie Raitt, and Linda Ronstadt at a really young age. I’m also a die-hard Dolly fan. So, I grew up with a lot of the classic influences. In more of a modern sense, Alison Krauss is phenomenal. I also grew up when Christian music was huge. Jars of Clay and Switchfoot were the two biggest in that market. I was lucky enough to go on and work with Jars of Clay, which I sometimes have to pinch myself because we all still hang out! I still have the ticket from the first time I went to the Ryman, it was to see Jars of Clay. Sheryl Crow is another huge one. I could literally go on forever, but those are just a few.

To someone who has never heard your music, how would you describe your sound?

The easiest way that I tell people who I am is Sheryl Crow with a banjo. Definitely country in my heart, but you’ve got that bluesy/rocky banjo in there, too.

Could you tell us a bit about your songwriting process?

Definitely! I have memories of being a young kid and just coming up with melodies in my head. My sister used to give me flack because we’d go to walk the dog and I’d end up on the other side of the park singing. I never knew any difference. By the time I got to middle school and high school, I started arranging, and it sort of happened in a very natural progression. Of course, to come into the co-writing scene in Nashville, that was entirely foreign to me. I had grown up writing alone, and at first, I found it to be kind of confusing. Like, do people think I need help writing? But now I understand the collaborative nature of it. It’s such a gift to go into a room and connect with people. Not to get corny, but it’s almost on a spiritual level. There is a certain etiquette where you don’t just walk in and get to writing, you share something about yourself and, of course, you make friends along the way. There’s a large sense of vulnerability that is required to make good music. I love it, it’s such a part of me. It’s also a fun intellectual exercise in a city that is full of so many different types of writers. I’m constantly on my feet learning.

Was it difficult to open up to strangers about your life for writing purposes?

What’s interesting is I remember my BMI rep telling me that in Songwriting 101, don’t get too attached to certain lines or certain ideas. There will always be another day to write and person to write with. But to be honest, I almost had the opposite problem. To go in and have someone say that they don’t like something, I would almost become a little girl and apologize. But I feel like the more that I have grown into my own skin, the better at co-writing I have gotten. Feeling comfortable expressing myself, I now know when to back off, or when to put my foot down; you’ve got to learn that dance. It’s been an autodidactic journey, for sure.

What would you say to young girls out there who want to get into singing, playing, and songwriting?

I would say a couple of things to them. Number one, stay in school. I think one of the most valuable lessons I learned when I got here was good writing, is good writing, is good writing. Even if your English teacher is annoying, and you don’t want to read that book, you’re training yourself to be a good songwriter and storyteller. The other thing is, we’re always our own harshest critic, so just start. Just kind of rip the Band-Aid off and do it. I played in school, so I couldn’t avoid the fact that people who knew me were going to be listening to me. But, there is value in that too, because I’d have friends come up and say that they had no idea I could do that and that I was so good. Some days I needed that. It would happen at a time where I thought I sucked and them saying I was good kept me going. Also, it’s important to be adventurous! Some of my best gigs have been at dive bars where no one knew me. Another thing I was told is that it takes 15 years to become an overnight success. That’s me now, and that was me back in middle school and high school writing. No amount of progress is too small.

What can fans expect from you in the near future?

I’ve been on the road a lot this year. I’m in the process of booking more dates right now, so stay tuned on my social media. I will also be releasing new music! I actually just dropped a new video for my single, “High Wears Off.” It’ll be on iTunes soon, but the video is available on YouTube and on my Facebook. The song was tracked live with my band, which was a lot of fun. We really wanted it to feel authentic and organic. The rest of the music should be released this fall.