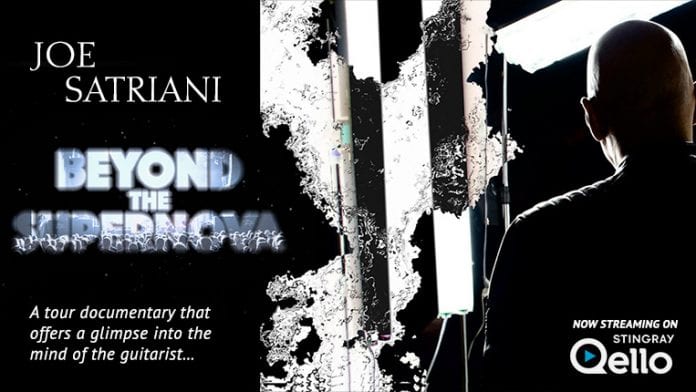 (San Francisco, CA)  July 6, 2018 – Announced today, world-renowned guitar virtuoso JOE SATRIANI, has joined forces with Stingray Qello to release his tour documentary, “Beyond the Supernova” filmed, edited, directed and produced by ZZ Satriani, while on tour in 2016 and 2017.  The film received high praise from fans and critics, alike, when it made its debut last October at the Mill Valley Film Festival, which also included a special intimate live performance by the star guitarist.

­Satriani said of the collaboration, “Stingray Qello is the place to go for music lovers and fans who thrive on live performances from their favorite artists. I’m always finding new concerts on the site, sounding and looking great, streaming at the stroke of a key! I’m so happy our film “Beyond The Supernova” has found a home at Stingray Qello.”

The documentary highlights the 30 years since the release of his multi-platinum selling album, Surfing with the Alien, as SATRIANI searches for the next step in his career. “Beyond the Supernova” is a tour documentary that offers a glimpse into the mind of the guitarist. Join SATRIANI while he performs music from Shockwave Supernova through Asia and Europe and as he looks back on his career. We learn of the autobiographical concept behind the record and how it plays into determining Joe Satriani’s next creative step. We’ll also go behind the scenes of the “Surfing To Shockwave World Tour” featuring performances from Joe, Mike Keneally, Bryan Beller and Marco Minnemann, as well as cameo appearances by guitarists Steve Vai and Guthrie Govan.

“It is an exciting and incredibly rewarding moment for us to announce that a legend like Joe Satriani has selected Stingray Qello as the only online streaming platform to share his critically acclaimed documentary, Beyond the Supernova, with his fans,” said Frédérick Ranger, Vice-President, Product Marketing of Stingray. “It is our mission to create opportunities for artists to connect and engage with audiences around the world through a multitude of music and video services. Having the opportunity to work with Joe Satriani is a dream come true for all of us.”

For two decades, the guitar icon has traveled the world, playing to sold-out crowds as both a headliner and as founder of the all-star “G3” guitar extravaganza.  SATRIANI’s studio and live recordings have sold more than 10 million copies worldwide to date and of his many solo albums, two have gone platinum and four others went gold, with 15 Grammy nominations between them.  His side project, Chickenfoot, featuring former Van Halen frontman Sammy Hagar, former bassist Michael Anthony, and Red Hot Chili Peppers’ drummer Chad Smith saw their debut album certified gold and their second studio album debuted at #9.

ZZ Satriani is a filmmaker based out of Los Angeles, CA. He earned his Bachelor’s Degree in Art History and Visual Arts from Occidental College, in 2015, with a focus in film production and studio arts. In late 2016 he began working for Commonwealth Projects, a creative projects company in Baldwin Hills Village. He continues to work here as a video editor and sound designer, as well as filmmaker, with clients that include musical artist Banks, The Annenberg Space for Photography, and TROPICS Juice Bar. He has also worked with Ibanez Guitars to create promotional videos for his father, Joe Satriani, who he frequently collaborates with.

Now streaming “Beyond The Supernova” exclusively on Stingray Qello:  http://qello.com/vip/satriani-bts-pr