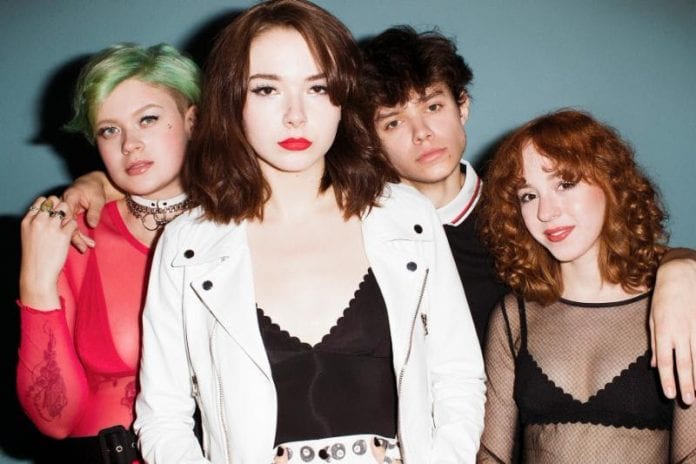 February 9, 2018 (Burbank, CA) – LA-based punk rockers The Regrettes have released the video for their new song, “Come Through,” off their forthcoming EP, Attention Seeker, out February 23 via Warner Bros. Records. The video premiered exclusively today viaRefinery29’s “The Drop,” who states, “’Come Through’ is an empowering anthem for women who are sick of being taken for granted.” The 5-track EP will include two new original tracks, a guitar-driven cover of “A Teenager In Love,” as well as acoustic versions of “Hey Now” and “A Living Human” Girl,” off their 2017 debut. Attention Seeker is now available for pre-order here.

Director Claire Marie Vogel enlisted an all-female-led crew to create the video, including the producer, cinematographer, production designer, choreographer, hair & makeup artist, and more. The video focuses on self-empowered frontwoman Lydia Night as she liberates herself from a bad relationship. Night explains, “’Come Through’ is about feeling like you’re someone’s b–ch and taking back your power!”

The new music drops just before the band hits the road, embarking on a west coast headline run this spring before they make the rounds at this year’s top summer festivals, including Coachella, Governors Ball, Bonnaroo, Firefly Music Festival, Treefort Music Fest, and much more to be revealed. A full list of dates is below.

“Come Through” is the first track to be released from the forthcoming Attention Seeker EP, the band’s latest release since their hugely successful 2017 debut album, Feel Your Feelings, Fool!, which garnered widespread critical acclaim from the likes of NPR, Vogue, Entertainment Weekly, Billboard, Stereogum, Consequence of Sound, and more. The band is comprised of 17-year-old Night (vocals, guitar) and rounded out by members Genessa Gariano (age 20, guitar), Sage Chavis (age 20, bass) and Maxx Morando (age 19, drums), who have collectively dominated the Los Angeles music scene with their infectious – and unapologetically honest – punk-driven pop songs. The Regrettes have toured extensively since forming in 2015, including a set at Riot Fest in Chicago as well as shows with Sleigh Bells, Kate Nash, Peaches, Cherry Glazerr, The Frights, and most recently, SWMRS and The Interrupters.