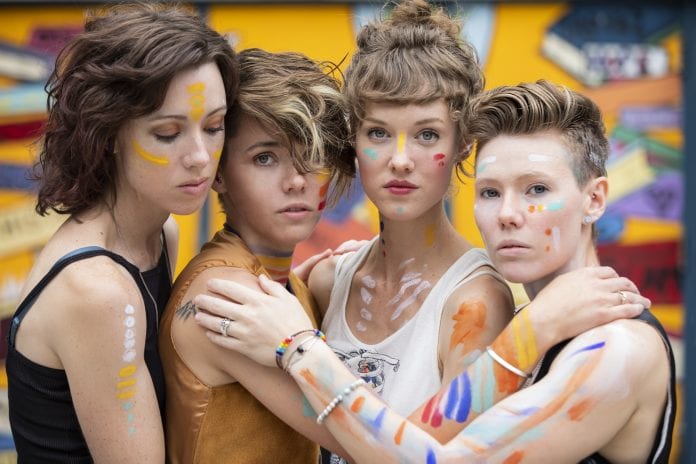 With the release of their new video “Rainbow” on January 31st, internationally-acclaimed band SHEL has launched a campaign to spread awareness and raise support for Hope Springz, a locally-run craft center in Vrindavan, India that empowers exiled widows by teaching them skills, providing community, and giving them purpose. “In many rural societies in India, people believe that the loss of a woman’s husband is a result of her bad karma,” says SHEL’s Eva Holbrook. “There’s a ceremony after his death that involves dressing her in white (the color of death), smashing the bangles around her wrist, and turning her out of society to beg on the streets. Often her own children abandon her. Our vision is to provide support for widows with the help of Hope Springz,” she continues. “This one room apartment empowers over 30 women, providing them with community, purpose, and loving support through skill development programs, including jewelry making. We commissioned Rainbow bracelets from Hope Springz as a symbol of restored dignity and color in the lives of the women who make them.” The bracelets are available for purchase HERE. All proceeds from the sale of the bracelets goes directly to Hope Springz to enable the center to continue their important work.

Eva traveled to India to make the music video for “Rainbow” with a focus on raising much-needed funds and awareness for these vulnerable women. SHEL (sisters Sarah, Hannah, Eva, and Liza Holbrook) hope their partnership with Hope Springz will make a lasting impact. After a period of rest and rejuvenation to focus on their individual needs and to nurture their sisterhood, SHEL is back with a new EP, Wild Child, produced with Joey Verskotzi and Tim Myers (previously of OneRepublic), set for release on March 6th. “Rainbow” is the first single from Wild Child, and also marks a new era for the band.

“There’s a code of love that preserves our purpose,” Eva explains. You can feel this code in the colorful sound and imagery of the band’s newest collection, starting with “Rainbow”; a soft, but powerful anthem inviting us to embrace unity in the midst of fear. “I had a vision of women in India when I started writing Rainbow, but I had no idea it would lead me to Vrindavan, or what it would mean to hold the women there in my arms. Their strength and hope changed me and made me realize the necessity of family and community.”

“Rainbow” became the symbol of a new era for SHEL. The band cleared the fields, let the ground rest and waited to see what would grow naturally. In the time spent creating as sisters instead of bandmates, a deep desire for connection through honest expression blossomed. “There’s a joy and fulfillment that we share as creatives when we take responsibility for our dreams.” Says Hannah. “We want to bring healing to the world. You can only do that if your collaboration is healthy.” With the sisterhood front and center, the scenes of a full-length album began to unfold with exciting depth and vividness, but something else was happening. “These incredibly joyful songs started to spring up,” recalls Eva. “We’re very grateful we had an opportunity to capture them with Tim Myers and Joey Verskotzi, but none of us saw an EP like Wild Child coming. We were processing some pretty heavy and traumatic life events in writing the album, and then we were given this pause to celebrate and share the joy of our journey.”

Raised in Colorado, the sisters grew up on an old trailer park that the family restored and turned into a farm where they had an unconventional upbringing. SHEL has become known for their stunning musicianship with Sarah on violin, guitar, Hannah on keys and synth bass, Eva on mandolin and guitar, and Liza on drums, djembe and beatboxing. Their versatile sound has lead to collaborations with producer Brent Maher (Ike and Tina Turner, The Judds) as well as visionary sound guru Dave Stewart (The Eurythmics).

After extensive touring across the U.S. and Europe, sharing the stage with world-renowned orchestras, and supporting Amos Lee, the sisters have taken some time off the road to write and record, as well as score Facebook’s hit television series Queen America, starring Catherine Zeta Jones. SHEL’s music can be heard in numerous films, TV shows, and commercials, including “The Best of Me,” “The Fourth Phase,” “Depth Perception,” “Charged,” the trailer for Women In Sports, “Shameless” (Showtime), “The Fosters” (Freeform), “Riverdale” (Netflix), “Search Party” (TBS), as well as commercials for Chevy, Toys R’ Us, Panadol, Splenda, and Glade. Whether playing festivals or with orchestras, they captivate audiences across the globe with their distinctive arrangements. No Depression called them “A must-know young band for anyone wanting to keep up with tomorrow’s greats,” and they have garnered praise from NPR, American Songwriter, USA Today, MTV, and more.