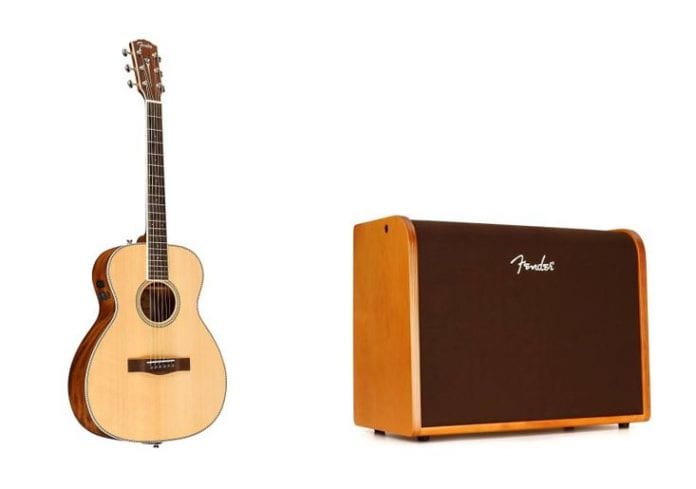 As the song goes, “Love and marriage…go together like a horse and carriage.” When I was asked to review Fender’s new Paramount PM-TE Travel Standard acoustic guitar and Acoustic 100 amp, I felt that they’re a match made in acoustic heaven!

A match made in acoustic heaven

The Paramount PM-TE is a timeless beauty with its natural finish, checkerboard purfling and rosette, and Ovangkol fretboard and bridge. When you pick it up and hold it in your arms, it’s light and feels organic as the open-pore finish is meant to be.

“It sets the gold standard for travel guitars.”

While billed as a travel guitar, it seems more of a parlor-sized acoustic. I say this as a compliment because when played acoustically, its volume fills the room quite pleasantly but with undeniable presence and character. Notes bloom and chord ring, so my quick test drive with it turned into a 45+ minute session (it’s a good sign when your guitar gear makes you forget time).

“The collaboration of two masters.”

As an acoustic, it has the solid Fender high quality, so it sets the gold standard for travel guitars, but the fact that it’s quite well equipped electronically makes the PM-TE even more of a winner. The Fender and Fishman designed preamp is the collaboration of two masters, which gives you the welcomed tuner, tone controls, and phase switch right at your fingertips.

So, with its classic beauty, warm and full tone, and uber-useful features, it most certainly lives up to its Paramount moniker.

Now it only gets better when you plug the PM-TE into the Fender Acoustic 100 amplifier. As a guitar amplifier connoisseur, I believe that you have to spend some quality time with an amplifier to be able to get to know it and it, you.

First, my hat’s off to the insightful Fender engineers, because here they’ve come up with another design that is distinctly “Fender.” The two-tone Natural Blonde finish is a head-turner unto itself, but the integrated handle also acts as a top port to help fill the room with sound as if to display its function is in its form…bravo!

Its two-channel solo performer set-up is well laid out, and, like the PM-TE, its features are useful, effective, and of a “pro grade” sound quality. It even has Bluetooth wireless streaming and universal voltage for international use, nice.

“A shining star of an acoustic amp.”

You can easily see how a performer can carry all they need in one trip (i.e., guitar, amp, microphone, and stand).

With the PM-TE plugged into the Acoustic 100, the pair sounded as of a kindred spirit…the Yin and the Yang. Together, they sounded like two souls who have found each other and have become one. You play a chord and admire it. Notes sing and chord comes alive. It’s almost like a dream sequence in a movie. As previously mentioned, when your guitar gear inspires you to create and play (and play), it gets a gold star. After running through some acoustic Zeppelin numbers on the PM-TE (ex., “Going to California”), which sounded holier-than-thou, I took a break for lunch to come back for a second opinion. I plugged in my ’52 reissue Tele and my 60thanniversary Strat and p

ut the Acoustic 100 through the paces. I could dial up a shimmering “Lucy in the Sky with Diamonds,” a retro “Stray Cat Strut,” and summoned a righteous “Ten Years Gone” as well as some other extended jams. After spending hours with the Acoustic 100, I’m confident to say that it performed beautifully. The funny thing is that, more than most amps, it retains a “woody” tone to it, but I’m convinced that’s what it’s supposed to do. Again, Fender, well done…very well done.

“They’re a match made in acoustic heaven.”

As long as I’m able to hang onto this Acoustic 100 for review, I keep it out, plugged in, and ready to flow.

In wrapping it up, the Fender Paramount PM-TE Travel Standard is a delightful performer of an acoustic guitar that clearly stands on its own merits as a studio and stage performer, and the Acoustic 100 Amp is a shining star of an acoustic amp for its well-thought-out, versatile woody character. Me thinks I’ll go try it out again (and again) just to be sure.