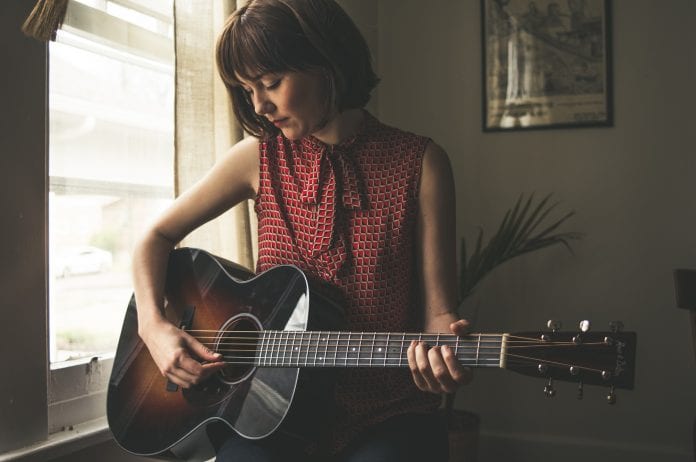 Growing up in the Bay Area, Molly Tuttle began playing guitar at age 8, inspired by her father, Jack Tuttle, a musician and private instructor. Within three years, she was performing at bluegrass and folk festivals in Northern California, and at 13, she released her first album.

Not content to solely tour and record, Tuttle left the West Coast to study music at Berklee, where she enrolled in an American roots program and learned theory. After graduation she moved to Nashville, where she recorded her solo debut EP, Rise. Released in June, the seven-song disc entered the Billboard Bluegrass Albums chart at No. 2.

In July, the International Bluegrass Music Awards (IBMA) released their list of 2017 nominees. Tuttle, who won the 2016 Momentum Award in the instrumentalist category, is up for three awards this year: Emerging Artist, Female Vocalist, and Guitar Player of the Year, making her the first woman ever nominated in the latter category.  The Awards show will take place September 28 at the Duke Energy Center for the Performing Arts in
Raleigh, North Carolina.

The songs on Rise were written over a period of years and life changes, during which Tuttle expanded her personal perspective and her musical boundaries. Looking to move “outside of the box,” the album pushes beyond traditional bluegrass while never straying far from its roots.

You were raised in the Bay Area, moved to Boston to attend Berklee, and then relocated to Nashville. How have your experiences in all three areas influenced or informed your songwriting?

Growing up in the Bay Area, I was part of a really supportive and inspiring community of musicians. My dad has taught private music lessons in Palo Alto for over 30 years, so when I became interested in music he took me to a lot of bluegrass festivals, jams and shows. Some of my local heroes in the bay were Laurie Lewis and Kathy Kallick, who both are amazing singers, instrumentalists, songwriters and band leaders. I was truly fortunate to have the two of them in such close proximity to where I grew up. Seeing them both play when I was young, and later getting to be friends and share stages with them, inspired me to start down the path of leading a band and writing my own material. My dad, of course, was one of my biggest influences and mentors, and we played a lot of music together when I was growing up.

Living in Boston was hugely influential for me. I studied guitar at Berklee College of Music, and going there blew the doors open to so many different styles of music and ways to think about creating music. I had so many wonderful teachers who challenged me to open my mind to new sounds and get out of my comfort zone. There was also an American Roots Music Program that I fell into, which was where I met many amazing teachers and students who played roots music. Being around so many incredibly talented musicians in a learning environment really transformed my musicianship and writing.

Moving to Nashville was a hard transition for me at first. I felt a little lost being out of school for the first time and living in a new city. The music scene felt overwhelming, but I quickly learned how supportive and welcoming everyone in town was. The creative community in Nashville feels endlessly deep to me. There is so much history and inspiration in the air that you can feel everywhere you go. I’ve written songs with so many incredible writers here who have taught me a lot about finding my own voice with my songs.

Although the songs on Rise were written over a long period of time, could they have been recorded anywhere other than Nashville? How integral was the Nashville environment and community to the outcome of the recordings?

Almost all of the musicians who played on the album or who I wrote the songs with were based in or around Nashville when the EP was recorded, so it really couldn’t have happened anywhere else with the same result. Having people like Darrell Scott, Jano Rix, Nat Smith and Megan McCormick all nearby is a truly amazing part of living in this town!

How did you begin your working relationship with Kai Welch, and what did he and Erick Jaskowiak bring to Rise, and to you as an artist?

I reached out to Kai because I was a huge fan of the album he did with Abigail Washburn and also the album Sake of the Sound that he produced for my friends in the band Front Country. I’ve admired his musical sensibilities for a long time, and one of the things that drew me to him was that he is familiar with the roots music vein but comes from more of a pop and singer-songwriter background. I thought he could help me experiment with new sounds and push my songs in exciting directions. Kai and Erick both brought so much love and creativity to the project. They both poured so much of themselves into each track and I’m incredibly grateful for their support.

You endorse Huss & Dalton guitars and Huber banjos. How did those endorsements come about, which models do you play, and what makes them the right instruments for your sound?

I have been a fan of Huss & Dalton guitars since the music store where my dad works, Gryphon Stringed Instruments, started carrying them. I love how punchy they are without sacrificing a dark, rich tone. I was playing an older Martin a few years back, but I couldn’t get enough volume from it and I was nervous about taking it on the road. I approached Huss & Dalton about their guitars and they happened to have the model I was interested in (TD-R Custom with Thermo-cured top) in the shop. I immediately fell in love with the guitar they sent me, and as I played it I found myself coming up with so many new ideas and songs. This year I got a TOM model from them as well, which is basically an OM size with mahogany back and sides and a thermo-cured red spruce top. I love the smaller-sized guitar for less bluegrass-oriented ensembles and for writing with. It has become my favorite to play at home, and I’m excited to take it on the road a bit this fall as well. I also recently got a new 18 model guitar from Prewar Guitar Company, which I am really excited about. I can’t recommend their guitars enough. Of all of the newer guitars that I’ve tried, these have the most authentic vintage sound. I got my Huber banjo when I was in high school and playing a lot more banjo than I am now. It’s their mahogany model and I’ve always loved how it sounds. Steve Huber has made some of my all-time favorite banjos, so it’s an honor to endorse them.

Are there certain recording and miking techniques that you prefer for your vocals and guitars?

I use a Neumann 105 for vocals onstage, and for my EP I used a Neumann M149. I don’t have a standard guitar mic for in the studio, and when I mic my guitar live I usually just use a 57 or 58.

Do you stay close to the original arrangements of your songs when you perform, or do you improvise?

We stick with overall arrangements in my band but keep that as more of a loose template that leaves room for improvised solos, dynamics and accompaniment.

How do you keep your sound consistent from venue to venue?

We use roughly the same mic setup and use some of our own mics. We don’t travel with a sound person but try to keep the other factors consistent.

You began playing guitar at age 8, were onstage at 11, and in the studio at 13. Obviously, you have become an established artist, with awards, cover stories, and a tremendous YouTube following. Early on in your career, however, what were some of the biggest challenges you faced as a musician and how did you overcome them?

Some of the biggest challenges I faced early on were with self-confidence and getting out of my comfort zone. There were times when I would get onstage or in a jam with people I really admired and I would sort of freeze up. Over the years I have developed a lot more self-assurance in my playing and in myself as a performer. I think that has been really important because I’ve seen how confidence affects the performance on every level.

Bluegrass is known for festivals, jamming, and a sort of free-flowing style of playing — precise and technical, but with that spirit of musicians playing together as one. How do you maintain the balance between technical perfection and onstage spontaneity?

It just takes a lot of practice and time playing with others in a spontaneous way to get to the level of doing it onstage. At least it did for me. You have to take a lot of risks and eventually that starts paying off, but first you just need to get out there and make mistakes.

You have worked, and continue to work, with other artists. How has that made you a better musician and songwriter?

Everyone has a different way of approaching the creative process, so there is always something to learn. I love collaborating and taking on different roles. I’ve learned a lot about accompaniment and supporting others from being a side person in bands, for instance. Each situation has some new lesson to take from it.

In addition to those collaborations, you are a member of the Goodbye Girls. How do the various projects you are involved with fulfill different sides of your goals and creativity?

With the Goodbye Girls I feel like I have a great outlet for groove-based music, instrumental music, and traditional material, more than I do in one of my own shows. We play quite a few old-time fiddle tunes, and I’m doing less lead guitar and only singing about a third of the songs in a set. I’ve always loved old-time and traditional music, so touring with that band feels like a reset. I’ve also learned about Swedish folk music from Lena Jonsson, who plays fiddle in the band, and I’ve totally fallen in love with that style. We’ve toured over there a few times, and the fiddle music and folk dancing is such an inspiring and joyful tradition.

As new audiences discover your music, what do you hope they take with them after listening to Rise?

I hope people can take meaning from the lyrics and maybe relate the stories and feelings to their own lives. I hope people can listen closely to the solos and instrumental parts, because so many of my favorite musicians played incredible stuff! It was a real honor to have gotten to create with everyone who played on the EP.