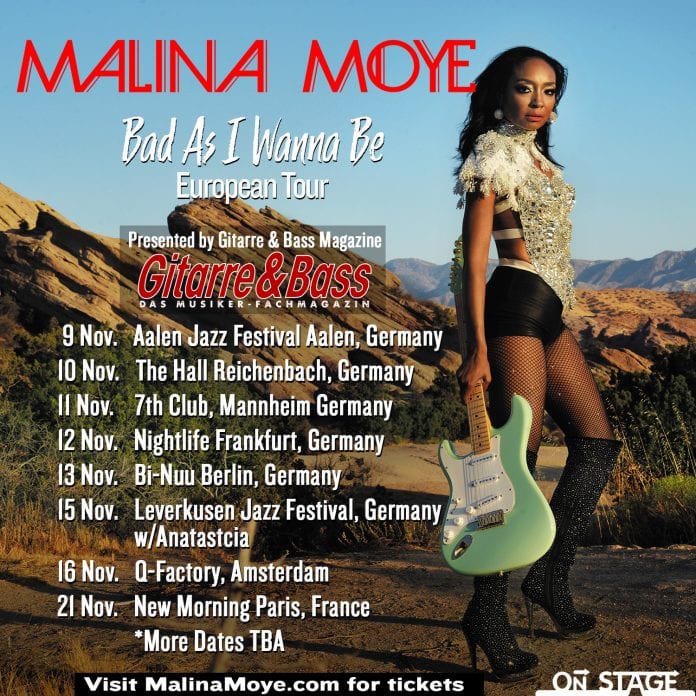 Number one-selling Billboard artist Malina Moye is set to tour Europe this autumn with her genre-defying album “Bad As I Wanna Be.” The tour kicks off at the Aalen Festival in Aalen Germany on September 9. Moye’s album reached number one for two consecutive weeks on the Billboard Blues chart this year, and her signature Rock sound has garnered rave reviews from “Rolling Stone France” and “Eclipsed Magazine Germany” to name a few. United Kingdom’s “Guitarist Magazine” stated that “Moye is one of the most powerful guitarist working today.”

Locked and loaded, Moye talks about the album, “I kept coming back to a celebration of self and for me; everything about this project, the music, the artwork, and the theme is about being an empowered woman who is her own superhero.”

Ms. ‘Bad As I Wanna Be,’ further states, “It’s about redefining the status quo and being unapologetically you. We all matter and we all count. This album was a personal letter from me to whoever will listen, and I can’t wait to perform live in Europe and leave it all on the stage.”

Malina Moye has carved out her own lane among the new breed of Rock artists with her unique blend of Funk, Rock, and Soul. From honoring the Queen of England and playing on Experience Hendrix Tours to being featured at Rock and Roll Hall of Fame’s tribute concert for music pioneer Chuck Berry, Moye has been considered a premiere guitarist with Guitar World Magazine naming her as one of “the top 10 guitarists to know.” Her sophomore album “Rock & Roll Baby” has garnered three Billboard charting singles on various charts in the Top 40. For more information, please visit MalinaMoye.com. The “Bad As I Wanna Be” tour dates are below.

Bad As I Wanna Be tour dates: